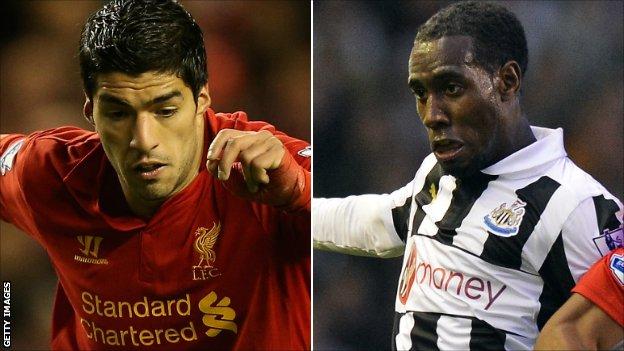 Newcastle United's Vurnon Anita is not surprised by the split opinion in the game on Liverpool striker and former Ajax team-mate Luis Suarez.

Suarez, 25, has made regular headlines since his January 2011 move to Anfield, with his goals and talent offset

"In Holland it was the same. I know him very well and I know he plays like that," Anita told BBC Newcastle.

"If he's on your team you're happy, but if you play against him you hate him."

Anita on the Premier League

It's very fast, the games are very quick - it's up and down, up and down

The pair were friends at the Amsterdam club before Suarez moved to the Premier League, a move that Anita replicated with his switch to Newcastle last August, and the duo have stayed in contact.

"He's a very nice guy. He likes to joke with people," Anita added.

"He's enjoying himself in England. We speak a lot and we keep in touch."

Netherlands international Anita was a versatile member of Frank de Boer's Ajax squad prior to his move to the English league, and has continued to play a variety of roles at St James' Park.

"In Holland I played in different positions, so I can do that. I'm used to it," Anita continued.

"If I can play in other positions it's good because I like to play but maybe in the future I can establish myself in midfield and play there, but it takes time.

"You have to get used to the game, and the training is different, but I hope to adapt quicker than one year.

"I do extra work to help me adapt quickly."