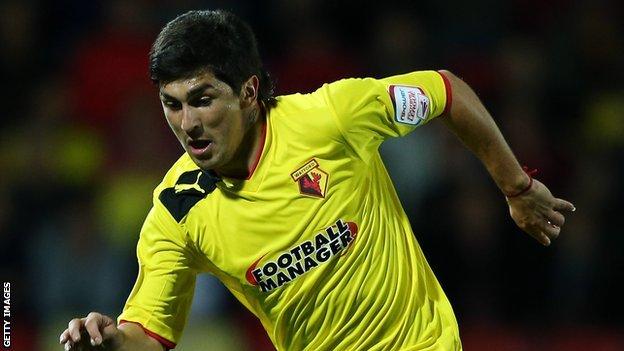 Watford boss Gianfranco Zola has told striker Fernando Forestieri he must learn to hold back during games if he is to reach his potential.

The Italy Under-21 international, on loan from Udinese, has played for nine clubs in his short career.

"He's got lots of potential. At times he needs to use his potential better," Zola told BBC Three Counties Radio.

"Sometimes he loses energy in a way that he shouldn't. He needs to become more economic in his play.

"If he saves himself energy sometimes in useless moves and focuses on the ones that matter then he can be a player that makes a big difference."

The Argentine-born forward has caught the eye this season with his pace and flair, but has also drawn criticism for

He is one of many strike options for Zola, who has yet to settle on a consistent front pair, with Troy Deeney, Chris Iwelumo, Steve Leo Beleck, Matej Vydra and Alex Geijo to choose from.

"It's a tough call for me because I've got six strikers and they're all very good," said the former Chelsea forward.

"With the number of games we need to play we need to keep them rotating. The key is everybody has to be motivated because we'll need all of them for the many games."