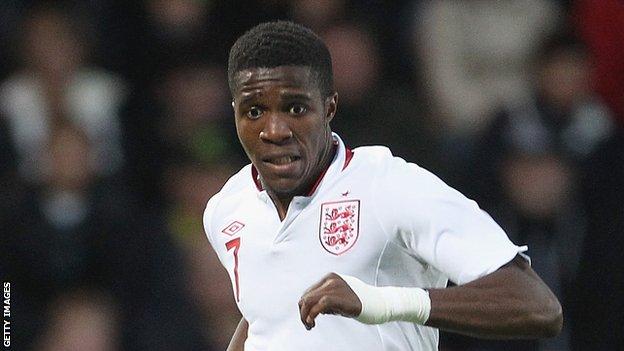 Zaha, 20 on Saturday, has attracted interest from Premier League clubs.

Holloway told BBC London 94.9: "He's played 100-odd games already at the age of 19. Sometimes you don't get that at these bigger clubs.

"Yes, people will covet him. But it's all about timing. There is a lot in his game that we can all work on with him."

Zaha, who came through the youth academy at Selhurst Park, has scored 14 goals in 108 appearances for the Eagles since his debut against Cardiff in March 2010.

The England under-21 international is under contract until the summer of 2017 but was the subject of a £7 million bid from Bolton in January and has continued to be monitored by several top flight sides.

Holloway, who was appointed as Palace manager on a four-and-a-half year deal this week, said: "There will be a right time. I don't know when that is.

"Wilfried is a very lucky man. He's in a place where he is playing and the crowd absolutely love him. Life couldn't be better.

"Who's to say we can't catch them and get him playing in the Premier League very quickly?"

Holloway added: "He's an absolute joy to watch and a credit to Crystal Palace. It's a joy to meet him and have a chance to work with him."