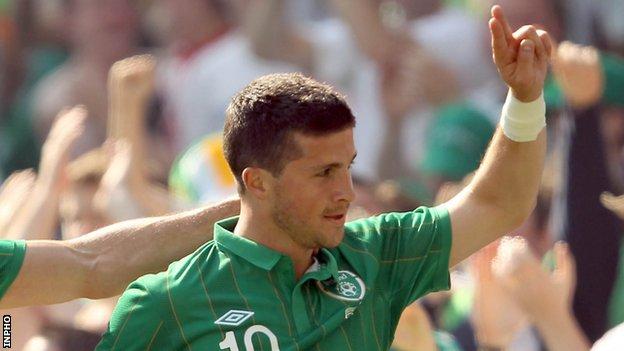 West Brom striker Shane Long has been added to the Republic of Ireland squad for next week's friendly against Greece in Dublin.

Long was left out of the provisional squad because of a hamstring injury but then played for 71 minutes in West Brom's win over Southampton on Monday.

Captain Robbie Keane is not travelling from the US for the 14 November clash.

Record Republic goalscorer Keane will remain with his LA Galaxy club as manager Giovanni Trapattoni takes an opportunity to assess other players.

These include Long who has endured a turbulent relationship with Trapattoni in recent months.

Trapattoni described Long's behaviour as "idiotic" amid confusion over the striker's fitness for the friendly against Serbia in August.

Long was named in the Republic of Ireland team but Simon Cox came in as a late replacement with Long said to have suffered a calf injury in training.

Norwich midfielder Wes Hoolahan is in line to win only his second cap against the Greeks.

The 30-year-old was initially included in the Republic squad for the August friendly in Serbia but was unable to accept the recall due to injury.

Fulham defender Stephen Kelly is also included despite reports of a bust-up between him and assistant coach Marco Tardelli between the October matches against Germany and the Faroe Islands.

Sean St Ledger and Richard Dunne also remain out because of injury although Aston Villa defender Dunne returned to training on Monday after over four months out because of a groin injury.