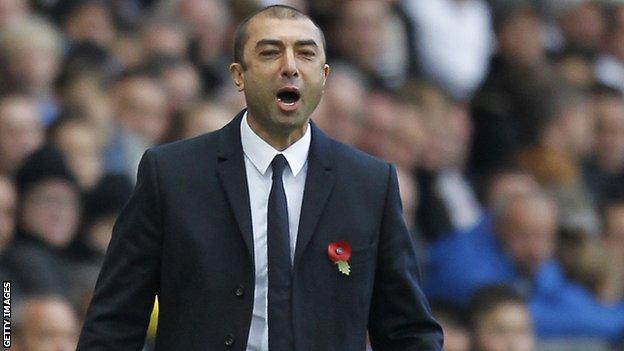 Roberto Di Matteo says every Chelsea player needs to produce "a perfect game" in their Champions League clash with Shakhtar Donetsk on Wednesday.

Defending champions Chelsea are second in Group E, three points behind leaders Shakhtar ahead of the meeting between the sides at Stamford Bridge.

"We need to be at our best," said the Chelsea manager.

"We need a perfect game. Every individual player has to perform at the highest of their ability."

Chelsea lost 2-1 in the reverse fixture, with Shakhtar making the ideal start by scoring after just three minutes.

Di Matteo knows the Blues must make a better start this time if they are to secure a much-needed win.

"It's important we start well and get the crowd behind us and draw confidence from a good start," he said.

"We have to focus on what we can do, the problems we can create for the opposition and let them be concerned about us.

"We've had some individual mistakes but, when we're fully focused, we're a very good team."

The Italian said two perfect performances would be needed to defeat the Spanish giants and his players responded by securing a 3-2 aggregate victory.

"There are some comparisons certainly to last season, when we had must-win games. This is another like that," said Di Matteo.

"Fortunately, we have players with the experience who have been through that before.

"We have to play the perfect game tomorrow to beat Shakhtar, but we're strong at home.

"We've shown that over many years, and we'll be fired up for this game to win it."

Chelsea will be without Ashley Cole, who is out with a hamstring injury he picked up in Saturday's Premier League draw with Swansea.

Juan Mata and David Luiz will undergo late fitness tests after picking up knocks at the weekend.