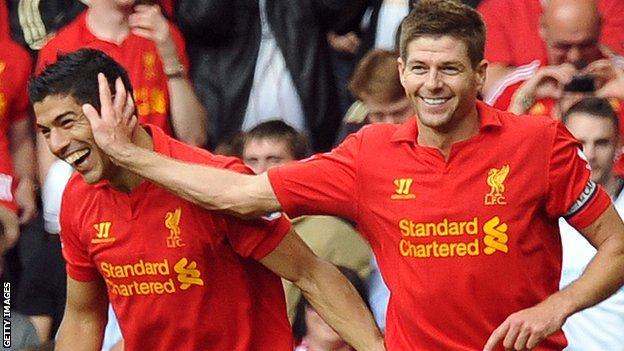 Liverpool captain Steven Gerrard says Luis Suarez is the best striker he has played with in his time at Anfield.

Gerrard has played with Michael Owen and Fernando Torres but, in a Twitter Q&A, listed Suarez as the "greatest striker" during his Reds career.

"For me [Gerrard] was a reference, the way he behaved with his teammates and with the supporters as well. I learned a lot from him. He's the perfect captain for Liverpool, not just because he's a great player but because he represents the values of the club."

The 32-year-old also said former team-mate and current Real Madrid midfielder Xabi Alonso was the player he would bring back to Liverpool if possible.

Gerrard said: "Best midfielder I've played with. I miss playing with him."

Gerrard made his 600th appearance for the Merseyside club on Sunday when a stunning Suarez goal earned Liverpool a 1-1 draw against Newcastle.

On the international front, Gerrard was asked: "If you could pick a four-man dream England midfield who would you put in there alongside yourself?"

He replied: "[Paul] Scholes, [David] Beckham and [Steve] McManaman, with me."

Gerrard, who came close to joining Chelsea when current Real Madrid manager Jose Mourinho was in charge at Stamford Bridge, said the Portuguese was the one manager he had not played for who he would like to play under.