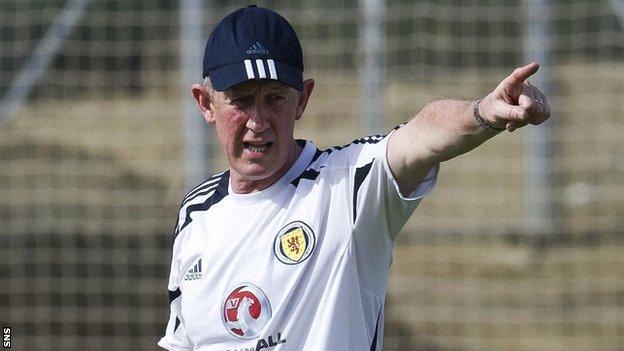 Craig Brown thinks Scotland caretaker Billy Stark has a chance to follow his own example by winning promotion from Under-21 coach to senior boss.

"It wouldn't surprise me, although I think it would surprise most of the media, if Billy managed to impress enough to be offered the job," he said.

Stark was assistant to Tommy Burns at Celtic before managing Morton, St Johnstone and Queen's Park then taking the Scotland Under-21 job in 2008.

The 55-year-old will take charge of the senior team for the 14 November friendly, assisted by former Hibernian and Inverness Caledonian Thistle assistant manager Donald Park.

Former Sunderland manager Ricky Sbragia moves up from youth coach to take charge of the Under-21 squad for their game the same evening against Portugal, assisted by former Feyenoord, Ajax, Huddersfield Town and Barnsley midfielder Dean Gorre and ex-Scotland striker Scott Booth.

And Brown thinks Stark is capable of making the jump to senior international level.

The 72-year-old Brown dismissed the prospect of returning to the Scotland job himself and suggested that his friend, former Scotland striker Joe Jordan, is an "outstanding" candidate.

"I have been in that job. It is a dream job for everyone. It was a good job and I thoroughly enjoyed it, but I'm enjoying and I'm commited to Aberdeen Football Club," he said.

"Although one or two people have suggested that, I don't think that's likely from the SFA anyway.

"Gordon Strachan, who I know very well, and Walter Smith are the favourites for the job and that's understandable.

"I hear in the media down south that Harry Redknapp and Terry Venables are being quoted.

"They are great football managers, but my humble opinion is that a Scotsman should have the job.

"I think it should be a rule that the manager has the same nationality as the players."

Motherwell manager Stuart McCall ruled himself out of the running for the job shortly after former Scotland manager Alex McLeish did likewise.

"If it was to come about in 10 years' time, it's certainly one I would be honoured to do," said the former Scotland midfielder.

"But there's five terrific candidates out there with greater experience and knowledge than myself.

"If you look at the candidates, two who've already managed the national team, Alex McLeish and the best manager I've ever worked for - Walter Smith.

"And two football men I have great respect for, Gordon Strachan and Owen Coyle, and somebody who was my boyhood idol, Joe Jordan.

"At the minute, Gordon Strachan seems to be the favourite and I think that would be a terrific choice, as would all the ones I mentioned.

"Walter's the best manager I've ever worked under, but Gordon Strachan's got a great record, while big Joe Jordan would love the job, I believe."