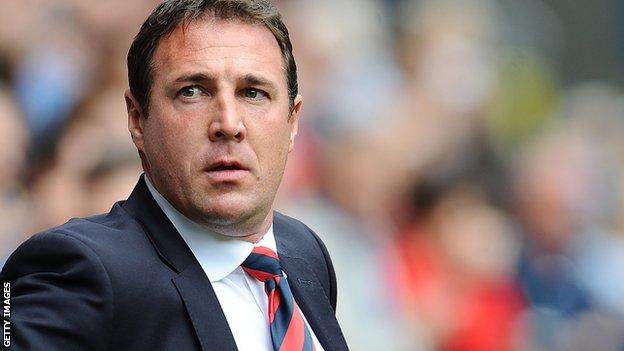 Manager Malky Mackay says Cardiff's 5-4 defeat at Charlton was their worst defensive performance of the season.

Cardiff had been leading 2-0 after 25 minutes but defensive errors proved costly as Charlton hit back to secure victory.

Defeat at The Valley was Cardiff's fifth away loss of the season in the Championship.

"Individual errors cost us dearly. To give away five goals is unforgivable," Mackay said.

"We've looked at them and certainly four of the five where you're thinking if someone does something completely different and something they've done all year then they don't go in.

"That was very frustrating. We've been really solid. Those guys have been playing really consistently to a high standard and that dropped tonight."

Cardiff were cruising at 2-0 with 25 minutes played before Charlton captain Johnnie Jackson's double before the interval levelled the score.

The home side took control in the second half with three further goals and despite late goals from Craig Noone and Aron Gunnarsson, Charlton held on for three points.

"The bulk of the first half was as good as we've played, certainly away from home," added Mackay.

"But five minutes to go to half-time we've got to see the game out and we didn't and someone didn't pick up at a corner for a header.

"On another night Marshs [keeper David Marshall] catches that quite easily when the ball comes into the box and doesn't spill it.

"That's quite simple in terms of looking where the errors come from."

Mackay said he would not allow his side to dwell on the Charlton defeat prior to Saturday's home game against fourth placed Hull City.

"There's no feeling sorry for ourselves," Mackay said. "It's a long season and there's going to be set backs.

"We'll continue to work hard and absolutely come back from this, no worries about that."

Mackay is being linked with the Scotland job after Craig Levein was sacked by the Scottish Football Association on Monday.

But the former Celtic defender, who won five caps for his country, said he intends to keep his focus on Cardiff City.

"It's not something I've thought about to be honest," Mackay added. "I'm disappointed Craig's lost his job - he's a good man.

"After the [Charlton] game all I'm thinking about is trying to do the best for my club at the weekend.

"My club is Cardiff City and I'm proud to be attached to this football club and be its manager and lead this group of players."