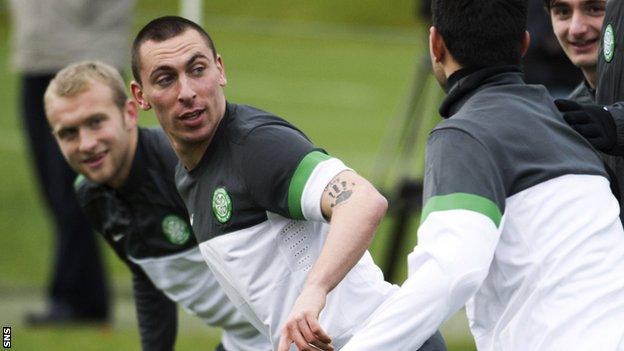 Celtic captain Scott Brown believes he is winning his battle against a hip injury that has disrupted his season.

The midfielder has been in and out of Neil Lennon's side and the manager has asked that he is rested for Scotland's friendly in Luxembourg as a result.

But Brown played the full 90 minutes against Dundee United on Sunday and is poised to face Barcelona.

"I have managed to play three games in a row and I am feeling the benefits," said the 27-year-old.

"I am starting to feel a lot better.

"I have had a lot of rest and my body is slowly getting better and better.

"So hopefully I am over the worst of it. You can never tell what is around the corner, but my body is feeling good just now.

"And, if I can keep training day in, day out, playing two or three games a week, I am happy with that."

The Scotland squad for next week's friendly will be announced on Wednesday by Under-21 coach Billy Stark following the sacking of Craig Levein.

Brown, who aggravated his injury in last month's defeat by Wales, refused to be drawn on the national coach's departure.

Asked if Levein should have been given more time, Brown said: "Not for me to say. I am just here to concentrate on Celtic versus Barcelona tomorrow.

"It's hard, to be fair. It is disappointing to see him go, but we are not too sure what is going to happen."

Celtic's Emilio Izaguirre, Thomas Rogne, James Forrest and Lassad have already been ruled out of the Champions League Group G visit by Barcelona.

With Gary Hooper and Georgios Samaras also being injury doubts, Lennon is pleased that Brown is responding to treatment.

"It is perfect timing," said the manager. "The fact that he is recovering better gives us encouragement.

"He is playing at the top of his game, I feel, and he will be very important, as he always is to us, and in particular tomorrow evening, with his experience and drive a huge asset."