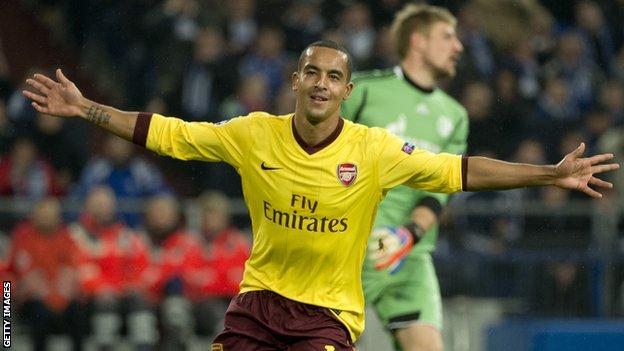 The forward, whose opened the scoring on his fourth start this season and a first in Europe since March.

"He did well, very well," said Wenger. "He was one of our best players.

"He had a positive attitude and was fresh as well. He was the only one you always felt could make a difference."

Walcott was a doubt for the match through illness, but took his place on the right of midfield in the absence of Aaron Ramsey.

He tapped Arsenal in front against the run of play and squandered a fine chance to secure all three points in injury time.

Of his 12 previous appearances this season, nine had come as a substitute - despite an impressive return of seven goals.

Theo Walcott's goal in Germany was the 50th of his Arsenal career and an eighth in 13 games - but only four starts - this season.

His previous starts were against Sunderland on the first day of the Premier League season, and Coventry and Reading in the League Cup.

Reports suggested Wenger might have been punishing the 23-year-old for his refusal to sign a new deal - his current contract expires in May 2013 and he could negotiate a free transfer in January.

Asked his opinion on the reasons for his limited starts, Walcott said "you'll have to ask the manager". Wenger has always maintained his selection decisions are made purely for footballing reasons.

"He has been injured for a long time - - and comes back now," said the Frenchman.

"It was no coincidence he had the chance in the final minute. We know he is a great player."

Olivier Giroud doubled Arsenal's lead in Germany, but Klaas-Jan Huntelaar pulled a goal back on the stroke of half-time.

Jefferson Farfan then equalised to keep Schalke top of Group B, a point clear of Arsenal and two above Olympiakos with two games remaining.

The Gunners have now won just two of their last six matches, but Wenger was pleased with their performance following a at the weekend.

"I believe we have shown a good response to Saturday's game and you feel the team is getting better," he added.

"For us it was important first of all not to lose and if possible to win. We managed the first part, not the second one.

"The regret we have is that we conceded the goal just before half time and we missed the [Walcott] chance at the end of the game."

Of Arsenal's hopes of qualifying for the knockout stage, Wenger added: "It's open. We are in a position where we want to win our home game [against Montpellier on 21 November].

"If we win, we have a 50% chance of going through because Schalke play Olympiakos. They are in a position where they have absolutely to win that game as well.

"It could go to the last game. We could, with luck, do it in the next game. We are in a position where we must win against Montpellier."