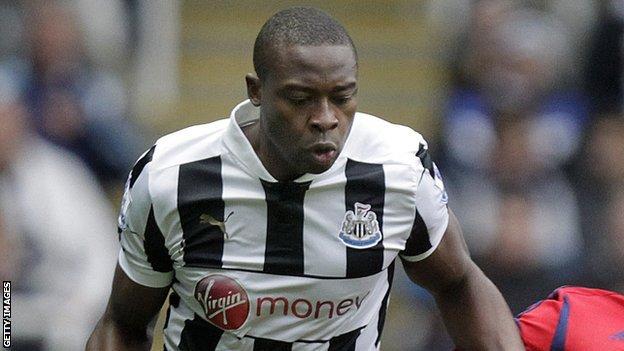 Newcastle United striker Shola Ameobi has been named in Nigeria's squad for the friendly against Venezuela on 14 November in Miami, Florida.

He was cleared last November by Fifa to switch national allegiances and play for the Super Eagles after playing for England's Under-21 side.

Despite getting the clearance a year ago, he is yet to play for Nigeria.

Coach Stephen Keshi has decided to give the 31-year-old a chance to be part of his 2013 African Cup of Nations plans.

"This is a big chance for Shola to fight for a place alongside other strikers hoping to be in South Africa," Keshi told BBC Sport.

"Like I said after the game against Liberia last month, he brings something special, a different dimension to the team.

"This friendly is an opportunity for some players who have not featured in our recent games to show what they can do ."

Obafemi Martins has been given an international lifeline after his good performances with Spanish side Levante.

With 17 international goals in 32 appearances, the striker will be looking to force his way into the South Africa-bound squad.

There is also a recall for defender Onyekachi Apam, who plays in France for Rennes and has not played for Nigeria since the 2010 African Cup of Nations.

Keshi is expected to announce the locally-based players to be added to the 11 overseas-based players he has called up by the weekend.

The coach has also said he is hopeful that Sidney Sam, who plays for Bayer Leverkusen in Germany, is ready to commit to playing for the Super Eagles.

"He's keen to join up with us, so we will wait and see how he responds when we open camp for the Nations Cup," Keshi said.

"I have spoken to him and he sounded very enthusiastic to be part of the setting".