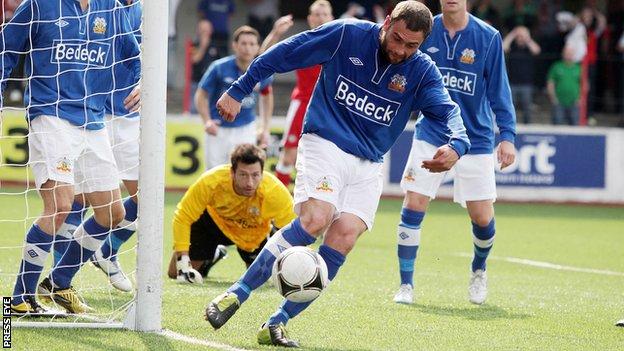 Glenavon player-manager Gary Hamilton says he is disappointed with the League Cup semi-final draw - as they have to play on Cliftonville's plastic pitch.

In the other 11 December semi-final, Linfield will have home advantage against the cup holders Crusaders.

"I am not going to lie, we would have preferred a home draw or having to play Linfield away," said Hamilton.

"We believe football should be played on grass in this country, especially cup semi-finals."

Glenavon have been struggling in the Premiership recently, taking just one point from their last seven fixtures.

But they beat Glentoran 2-1 on Monday night in the League Cup quarter-finals.

"The club has not been in a semi-final for a long time," added Hamilton.

"We should be in more semi-finals, but the financial position at Glenavon is not what it used to be.

"If you look at the other semi-finalists, they are probably the three clubs with the biggest budgets in the league.

"In cup football anything can happen and my players have an opportunity to get into a final."

Crusaders reached the last four by beating Lisburn Distillery in the quarter-finals on Monday night.

Linfield hammered Ballymena 6-0 away while Cliftonville came from behind to beat Portadown 3-1 at Solitude.