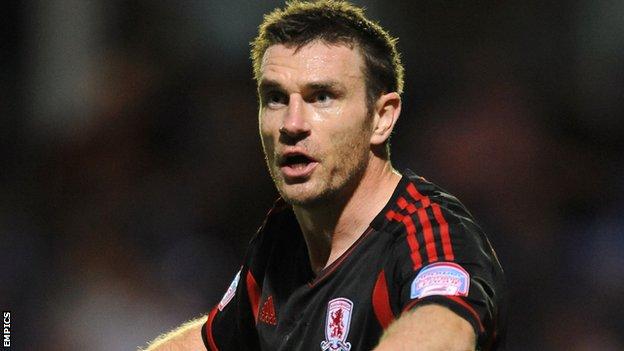 Bristol City loan defender Stephen McManus is expected to return to action in six weeks after scans revealed he has not torn his cruciate ligament.

The 30-year-old Middlesbrough player was carried off in Tuesday's 2-0 defeat by Birmingham and the club initially thought he would be out for the season.

But McManus, whose second spell at Ashton Gate will end in January, has only strained the knee muscles.

Midfielder Cole Skuse will also be sidelined until December.

It's a real relief for Stephen because we feared the worst

The 26-year-old was taken off in the same game with fractured cheekbone and will now require an operation.

Manager Derek McInnes said: "Cole has pain in his nose and eye socket, linked to the fractured cheekbone so he'll need surgery to insert a metal plate.

"It's a real relief for Stephen because we feared the worst. He's popped a capsule at the back of his knee, as well as straining his cartilage, but the important thing is there's no tear.

"Given the timescale involved, we'll have to see whether Stephen is available to play for us again, but he'll undergo his rehabilitation with us here at Ashton Gate."

Meanwhile, City youngster Bobby Reid has signed a new contract with the Championship club until the summer of 2015.

The 19-year-old Bristolian came through the club's academy and has made one appearance for the first-team, in the 3-0 win over Hull in May 2011.

He had a loan spell at Cheltenham Town but his time at the League Two club was cut short by injury.

McInnes added: "Bobby's a great boy to have about.

"He has two good feet, can see passes and is a confident lad. It's important we steer him in the right direction in terms of his education and development."