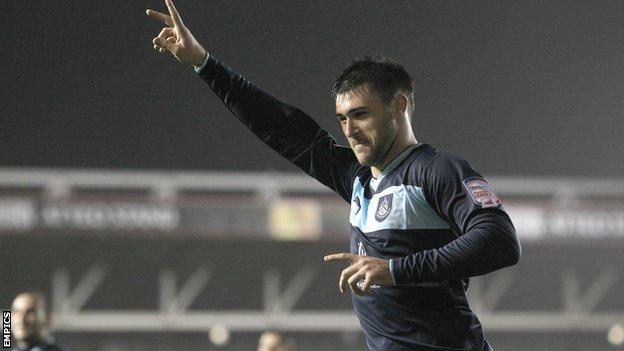 Burnley's Charlie Austin has broken another club record, becoming the quickest player to reach 20 goals in a season for the Clarets.

Austin overtook Andy Lochhead by reaching the landmark in 17 games.

His late winner against Leeds on Tuesday was scored in front of his father, who made a 550-mile round trip to see him in action at Turf Moor.

"He travelled up to watch from Bournemouth so he can have that one," Austin told BBC Radio Lancashire.

"To score 20 goals in a season is big, so I'm just happy with my overall performance at the moment."

But 23-year-old Austin has reached that figure in eight fewer games.

Along the way, he has scored hat-tricks against Peterborough and Sheffield Wednesday, and has also equalled another Burnley record by

made it two wins out of two under new boss Sean Dyche, the six points enough to propel the Clarets into the top half of the table.

"It's a massive win. After Saturday [beating Wolves 2-0] everyone was saying it was the 'new manager syndrome' and stuff," said the former Swindon striker.

"But since he's come in he's stamped his authority, he's told us what he wants and the lads are responding to it."

A former bricklayer, Austin has now scored 74 goals in 132 games since becoming a professional.