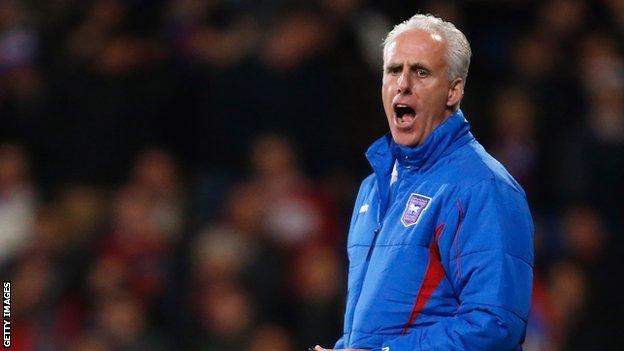 The former Wolves manager appeared to have made an instant impact with a in his first game in charge.

"But I didn't come away from Birmingham thinking we'd turned a corner, that everything was going to be OK.

"I've certainly learned a lot. I'll learn even more when I watch it back in the morning.

"There's a lot to look at. It's really disappointing."

Town, 1-0 down at half-time, conceded three quick-fire penalties after the break - with Glenn Murray missing one of the three - as Palace ran out convincing winners in Ian Holloway's first game in charge.

"I've never seen a team concede three penalties at all - never mind in 11 minutes. It was bizarre and it's killed us off completely," said McCarthy.

"The penalties, I'm undecided on. It's disappointing for all the fans that came. I was probably encouraged a little bit in the first half. It's so disappointing in the second."

However, the former Republic of Ireland boss opted to single out loan players DJ Campbell and Richie Wellens, as well as Nigel Reo-Coker, who is on a short-term deal until January, as players who made a positive contribution.

"We've got so many loan players around and Nigel's shown a great attitude - as has DJ Campbell," he said.

"We've had players come here because they weren't fit. Richie Wellens has come here to get fit and I think he's doing OK. We've a lot to look at."

Reo-Coker, meanwhile, gave an outspoken assessment of the team's efforts.

He told the East Anglian Daily Times: "This is not about management, new or old - I think that's just an easy cop-out for some players.

"This is about the players, they need to stand up as men and be counted. It is about having desire and working hard and we did not work hard enough."

"Today is the bottom line - this is where it stops. I haven't come here to be made to look like a fool. As long as I am here, it's not going to happen again."