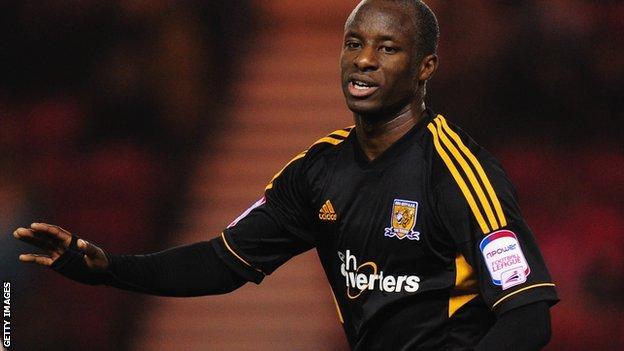 Hull City boss Steve Bruce is hoping forward Sone Aluko will not be called up by Nigeria for the forthcoming Africa Cup of Nations.

The 23-year-old has scored six goals in 15 league appearances for the Tigers this season after joining from Rangers in the summer.

"There's no way I can stop him from going if he gets called up.

"The way he's playing at the moment, it certainly is a possibility," Bruce told BBC Radio Humberside.

"I just have to hope that (news of) how well he is playing hasn't reached Nigeria. We'll have to wait and see."

Aluko, who made his debut for the Super Eagles in a friendly against Republic of Ireland in 2009, did not feature in any of the qualifiers for the tournament in South Africa that will run from 19 January to 10 February 2013.

The former Birmingham City and Aberdeen player opened the scoring for Bruce's side in Tuesday's 2-1 win over Wolves.

After a run of three successive defeats, the Tigers have now won five of their last six matches to sit fourth in the Championship.