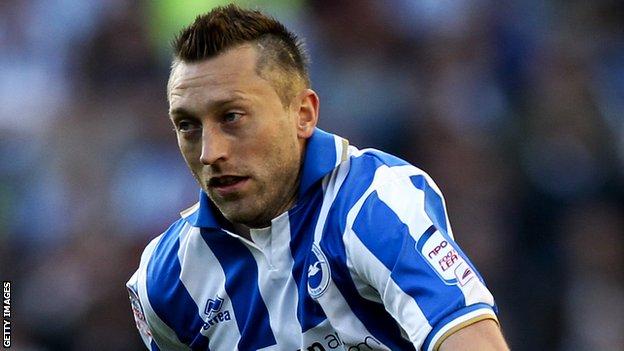 Brighton & Hove Albion striker Stephen Dobbie is looking to build on his first goal for the club.

The 29-year-old came off the bench to score the winner against Peterborough and secure a first win in eight games.

He told BBC Sussex: "It's been a hard transition for me, living in a hotel for a month and with a baby coming.

"I just want to get down to my football and show the fans the form I have shown in the past. The more important thing is breaking the cycle of not winning."

He added: "The boys worked tirelessly and we needed that win so hopefully it will kick us on now."

Albion manager Gus Poyet was pleased for the Dobbie, who joined the Seagulls from Swansea on transfer deadline day but had not scored on any of his nine previous appearances.

He wanted to make the difference and I'm pleased for him. He deserves it

"He showed his quality. Other players would try and smash the ball but his touch was magnificent. It was just what we needed.

"He was desperate to prove a point. It's important the new players feel part of what we want to achieve at this club."

Poyet hopes Brighton's victory over Posh can now be a springboard for his side to climb back into the Championship play-off places.

"We needed to win a game somehow and we've done it," the Uruguayan added.

"After a difficult first half we put everything on the pitch in the second half.

"It was a matter of time. We are still the same team and play the same way.