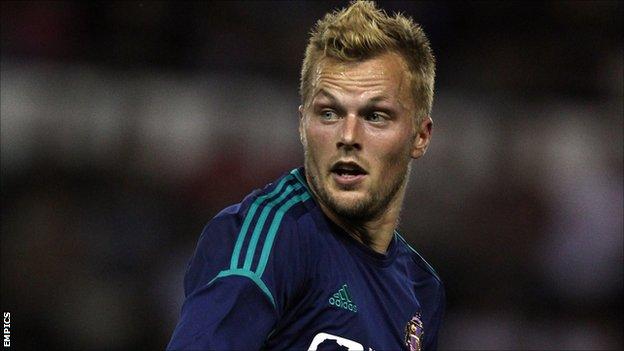 Midfielder Sebastian Larsson says it is too early in the season to suggest Sunderland may find themselves involved in a fight against relegation.

The Wearsiders have only won once in nine league games but also have only two defeats, one of which came at champions Manchester City.

"There are loads of games left and we've got too many good players for that so we've just got to focus."

Sunderland's record at Everton makes depressing reading. It's an unlucky 13 games since they last recorded a victory at Goodison Park, back in November 1996. Since then, they have also conceded a staggering 35 goals - with seven in one game when the pair met in November 2007.

He continued: "Over the season you get the amount of luck you deserve and I'm sure we'll deserve some luck in the future."

Back-to-back defeats, in the Capital One Cup at home to Middlesbrough and against Aston Villa in the league,

Goals in particular have been in short supply, with just six so far in the league, five of which have come from striker Steven Fletcher and the other an own goal by Newcastle United striker Demba Ba.

"You can see, especially against Villa, when we get into the positions to create things we get tentative and nervous and end up not creating very much at all.

"That's what the manager has been speaking to us about, to play with more freedom and not worry so much," added Larsson.

"We've definitely got the players to create things and score a lot more goals, but we're not doing that at the moment, so it's one thing talking about it but we've got to try to show it on the pitch."