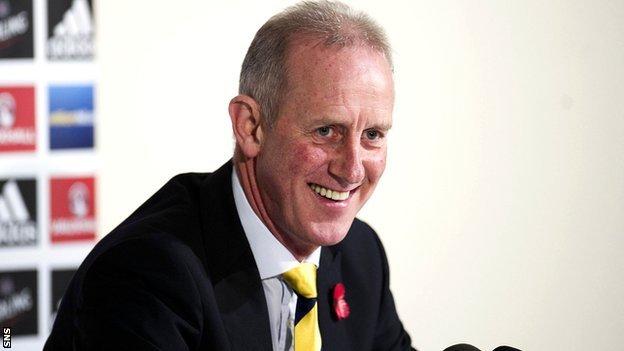 Interim Scotland manager Billy Stark has made few changes in his squad for the friendly with Luxembourg.

However, Gary Caldwell, Scott Brown, Alan Hutton and Allan McGregor are missing, with Stark insisting he was keen to rest some senior players.

"I've spoken to them and they're grateful to have the opportunity to have a break from this game," he said.

"For a November friendly, a lot of football has already been played and some players will have niggles they would love the opportunity to shake off.

"Allan McGregor and Gary Caldwell, in particular, have been real stalwarts and terrific players for the national team in recent years.

"There is nothing more to it than that. It's simply the stage they are at. Allan McGregor rushed back from injury and was an absolute star for us in those games.

"But he's out in Turkey now and, with family circumstances, it was a good opportunity to show a bit of compassion in that sense."

Stark has been put in caretaker charge of the national team following Donald Park, the Scottish Football Association's head of coach education, will assist Stark in Wednesday's match at the Stade Josy Barthel.