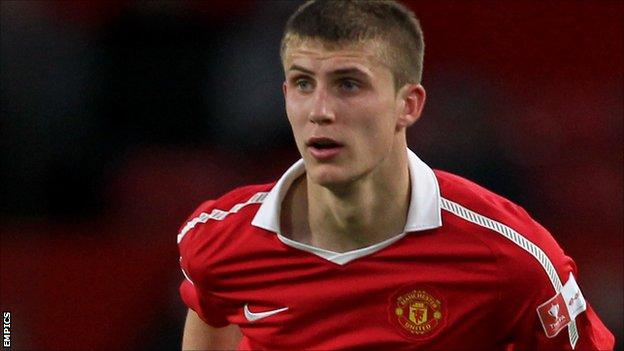 The 19-year-old defender joined the Old Trafford club from Charlton in July 2009 but is yet to make a senior appearance under Sir Alex Ferguson.

"He's a big boy, can play left side of [central] defence and left-back and gives us the height and presence we need," Abbott told BBC Radio Cumbria.

"He is extremely quick. He is going to be a really good player."

Abbott added: "He has lost his way a little bit. He has found it tough moving from Charlton, but he is well on his way back now and he covers me at centre-half, he covers me at left-back."

McGinty played four times for Morecambe last season and started this season on loan at Oxford, but the League Two side sent him back to Old Trafford after two cup appearances.

He and is available for the FA Cup second round tie with AFC Bournemouth.

Meanwhile defensive cover was made necessary by the hand injury picked up by Danny Livesey in Saturday's 4-2 FA Cup victory against Ebbsfleet.

"He's out for three weeks, I mean Danny will tell you two as he didn't even want to stop playing, so the quicker the better," Abbott continued.

"But it is another blow. As we just think we are just getting a group together, Danny is ruled out for three weeks and that is why we had to get Sean in."