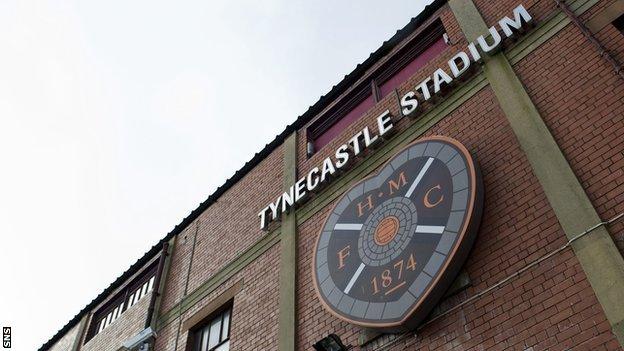 Hearts are warning fans the club might not survive until the end of the month after receiving a winding-up order over a tax bill of almost £450,000.

The Edinburgh club issued a plea for "emergency backing" from supporters to avoid the prospect of administration.

"This isn't a bluff, this isn't scaremongering, this is reality," read a statement from Hearts.

"Without the support of fans there is a real risk that Hearts could possibly play its last game on 17 November."

Without your help now, we could be entering the final days of the club's existence

Hearts host St Mirren on that date, with the men in maroon travelling to Inverness this weekend.

The latest matter is unrelated to

The bill, which has led to what is the sixth winding up order placed on the club in three years, is understood to be for unpaid PAYE and VAT and Hearts have eight days to pay or the order will be enforced by the court.

Hearts, who have confirmed that the amount due is £449,692.04, say they are hoping to reach agreement with HMRC over a repayment plan.

The Edinburgh club, owned by Lithuanian-based banker Vladimir Romanov, are appealing for fans to invest in a recent share offer and to turn out in numbers for the next three home games.

"Discussions on whose name is above the door, talk about how the money has been spent and debate on whether the investment in silverware has been appropriate is all natural but quite simply worthless at this moment in time," adds the club statement.

"The only valid debate now is how can you help the club.

"This club has been supported for the last seven years by generous funding from the majority shareholding business Ukio Banko Investicine Grupe (UBIG) and we continue to seek the support of UBIG at this stage.

"However, no business is immune to the financial realities of the current global economy and for this reason the club's reliance on its supporters is greater than at any point in the last seven years.

"Our partners, our opponents, media, football bodies, many others - all are watching and judging how we will respond to the challenge. If we cannot demonstrate that we are united and we represent a force then there will be no due respect to the club from anyone around.

"Without your help now, we could be entering the final days of the club's existence.

"There are limited options for the board of directors to take to avoid the catastrophic consequences that a funding shortfall would mean for the club.

"In a footballing sense alone Hearts will suffer an immediate 17-point penalty [for going into administration]. This would just be the start of a painful process that will affect every one of us and could lead to far more damaging actions that threaten the very existence of the club."

SPL rules on clubs going into administration were changed over the summer, with clubs receiving a minimum 15-point deduction or losing a third of the previous season's total.

Meanwhile, it is understood Hearts are unlikely to face any immediate sanctions from the Scottish Premier League over the non-payment of tax.

The only sanction for not paying HMRC on time is a registration embargo and the club already have this sanction in place for the late payment of salaries to players.

The SPL has been informed and could take further action if payment is not paid within the eight-day deadline.

Hearts insist the petition "has only recently been presented" to them.

Earlier, a club spokesperson said: "We would be hopeful that HMRC will accept that winding up the club would be totally unnecessary."