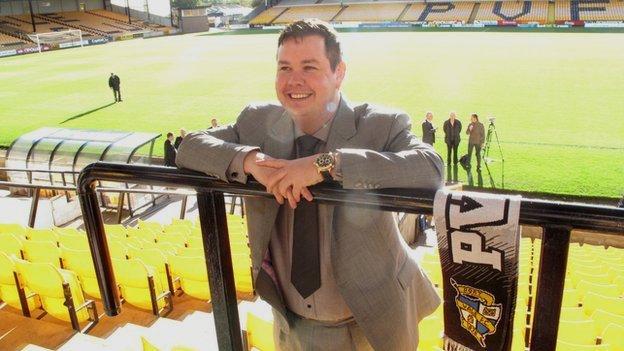 Port Vale expect Paul Wildes's proposed takeover of the League Two club to go through within the next seven days.

The final details of the Alchemy Investment Group's £1.25m bid will be discussed at a Football League board meeting on Thursday.

And Bob Young, a director of the club's administrators Begbies Traynor, has told BBC Radio Stoke that the deal now looks likely to be completed next week.

He also said that Wildes had a good meeting with the League last Friday.

"I would like to thank the Port Vale supporters for their ongoing patience and support.

"As I have previously stated, our intention is to develop the club both on and off the field.

"It's an exciting new era for Port Vale and I am looking forward to the months and years ahead.

"We will continue to keep supporters informed and updated on the news and decisions that affect their club."

Sheffield-born Wildes, who also attempted a takeover at Darlington earlier this year, runs a variety of businesses from hotels to hairdressers.

A former finance director for the Caudwell Group, which owned brands such as Phones 4U, Wildes owns some of the franchise for the hotel chain Holiday Inn.

Vale have been in administration since March but, despite Keith Ryder's summer-long takeover bid ending last month, things are now going more smoothly, with Micky Adams's side second in League Two.