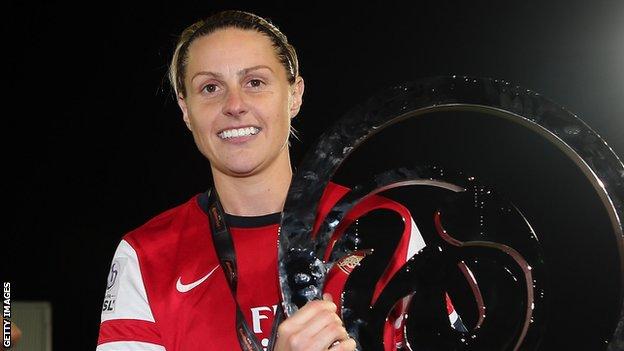 Kelly Smith scored a hat-trick as Arsenal reached the Women's Champions League quarter-finals with a 4-3 win in Potsdam, giving them a 6-4 aggregate victory.

England striker Smith scored twice in the first half, before adding a third midway through the second period.

Antonia Goransson (two) and Keelin Griffiths scored the goals for the hosts.

Laura Harvey's Arsenal created all the early pressure and both Smith and left-back Steph Houghton were denied a goal by goalkeeper Alyssa Naeher.

Arsenal keeper Emma Byrne had to make a save from midfielder Sara Doorsoun-Khajeh in Potsdam's first attack.

But the Gunners were soon back on the offensive and striker Kim Little wasted a good 18th-minute opportunity when she shot straight at Naeher.

This season's Women's Uefa Champions League final will be held at Stamford Bridge on 23 May, 2013. The defending champions are Lyon.

Jordan Nobbs then saw a goalbound effort kept out by Naeher, but the American keeper was finally beaten with what was the visitors' 11th goal attempt.

After Smith had side-footed in the opener, however, the tie seemed as good as over seven minutes later when the striker hit her second goal from an Alex Scott cross.

That left the Gunners 4-1 up on aggregate and, with two away goals, it left Potsdam needing to win the game by at least two goals in order to go through.

That looked unlikely, but the German side battled back and just before half-time Byrne was forced into a save by Evans.

And in the first 10 minutes after the break it was assists by Evans, signed from Glasgow City, that led to Goransson and Griffiths cutting the aggregate deficit.

White almost ended the Germans' chances with a 71st minute effort that struck the post, but nine minutes from time she did the trick - scoring what proved to be the tie's final goal from a Smith pass.

"At half-time I thought we would see the game out, but then they threw everything at us and hit two goals in five minutes.

"I kept losing track of the aggregate score situation and at one point I kicked a chair and think I've broken my toe.

"But we came through and I have to say Kelly Smith was the difference between the two teams - an absolutely world-class performance and a hat-trick from three chances.

"Credit to all the girls though, they had to work so hard and in the end we deserved to go through."