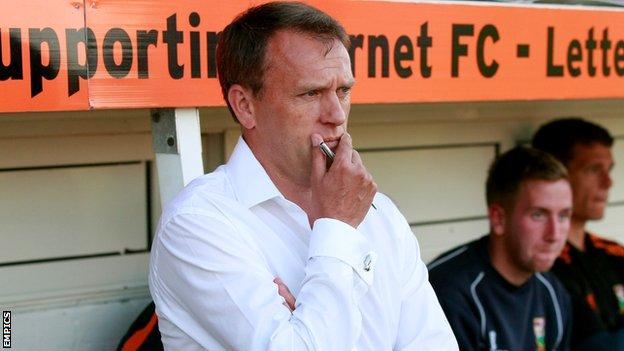 Barnet's joint-head coach Mark Robson says moving off the bottom of the League Two table will lift the club.

The Bees are unbeaten in four league games and leapfrogged Aldershot after Tuesday's 1-0 win over Torquay.

"It lifts the players, the fans and all the staff. It gives everyone a boost.

"It is just on goal difference but we always said we wanted to be further up the league and safe a little bit earlier. That's still the target," Robson told BBC London 94.9.

"It was a nervy win but you have to say our form is very good."

Meanwhile, Robson is hopeful of extending the stay of defender Krystian Pearce, who is on loan from Notts County.

"He's done really well for us and would be someone we would be interested in [keeping], for sure," he said.

"We'll look at the situation and be in conflab with Notts County and see if there is anything we can do."