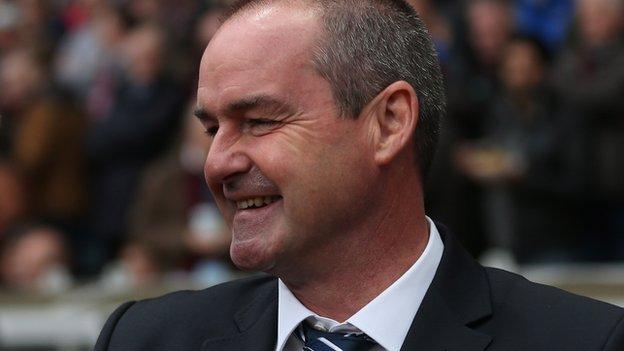 West Brom boss Steve Clarke insists his side's start to the Premier League season could have been even better.

Albion are fifth in the table having won five of their 10 games.

"I want more, if I'm being honest," the Albion manager, 49, told BBC WM. "We're not getting greedy, we're not getting carried away. We know what our expectation levels are within the club.

"But, if I look back at our games over the season so far, with a bit more luck, we could have had more."

I was the lucky coach who was appointed, who had the chance to come in the back of some sterling work by Roy Hodgson

After successive 2-1 defeats, in which they conceded two late Edin Dzeko goals to Manchester City before Papiss Cisse's deflected injury-time goal saw them lose at Newcastle, Monday night's 2-0 win over Southampton elevated the Baggies back up to fifth.

Albion go into Saturday's trip to Wigan on the same 17-point mark as fourth-placed Everton, just seven off top spot - and eight ahead of West Midlands rivals Aston Villa, who they finished above last season.

"It was what we needed after two really good performances and no points," admitted Clarke.

"We'd conceded six goals over the previous three games and it was a case of going back to basics and making ourselves difficult to beat."

Two-goal Peter Odemwingie stole the headlines, backed by Shane Long, who was replaced by on-loan Chelsea teenager Romelu Lukaku for the final 20 minutes.

Albion's rise back in the top flight

But Clarke also paid tribute to in-form Zoltan Gera's performances of late, while offering a reminder that he also still has Sweden international Markus Rosenberg waiting for his chance up front.

"The strikers are sharing the load really well and I've got another striker waiting in the wings in Markus Rosenberg," he added.

"And Zoltan Gera has played in a different position over the last couple of games because of injuries, playing in the little number 10 role behind the striker.

"He's done really well, but, when Zolly's in the moment, like he is now, you have to play him anywhere."

Gera's revival following a cruciate knee ligament injury, sparked by a stunning goal against Clarke's old club Liverpool on the opening day of the season, has been one of several tweaks made by the Albion boss to the team that he inherited from Roy Hodgson in the summer.

And, although Clarke has raised the bar even higher after Albion's 10th-place finish last season, the Scot freely acknowledges the debt he owes to the England manager.

"It's just a natural evolution," said Clarke. "I was the lucky coach who was appointed, who had the chance to come in the back of some sterling work by Roy Hodgson.

"He left a good foundation for me to be able to change one or two little things.

"But all the credit has to to go to the players."