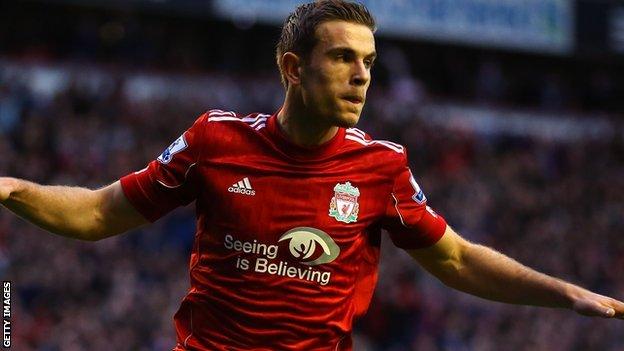 Liverpool midfielder Jordan Henderson is determined to become a success at Anfield and prove his critics wrong.

Henderson moved from Sunderland for £16m in 2011 but has struggled to establish himself as a first-team regular for the Reds.

"I am very focused on what I need to do and it doesn't matter what anyone else thinks," said the 22-year-old.

"I want my future to be at Liverpool so I'll give everything every day to make sure that happens."

He added: "I'm learning all the things I need to learn and I have got to take on board what people are saying around me to try to improve myself as a player."

Henderson's signing came as part of an influx of new faces on Merseyside, with then-Reds boss Kenny Dalglish signing Charlie Adam from Blackpool for £9m and Stewart Downing from Aston Villa for £20m.

Downing has not featured regularly for Liverpool under new manager Brendan Rodgers while Adam was sold to Stoke City for a reported £4m in the summer.

And striker Andy Carroll, a £35m buy from Newcastle in January 2011, is now on loan at West Ham United.

Critics have claimed the costly trio's performances in Liverpool shirts have failed to match their price tags - a charge they have also levelled at Henderson.

Earlier this year, Henderson, who has five international caps, played for England during Euro 2012 - but he is yet to start a Premier League match this season.

Asked if he thought he had been written off by the management at Anfield, Henderson said: "It probably looks like that, because of how much I played last year while this season I haven't started a Premier League game.

"It is not easy to think long term, especially when I've played a lot of games considering my age.

"Now I'm 22 and I'm not playing as regularly as I would like to.

"But I definitely think in the future, given the opportunity, I will take it and become a first-team regular for Liverpool."