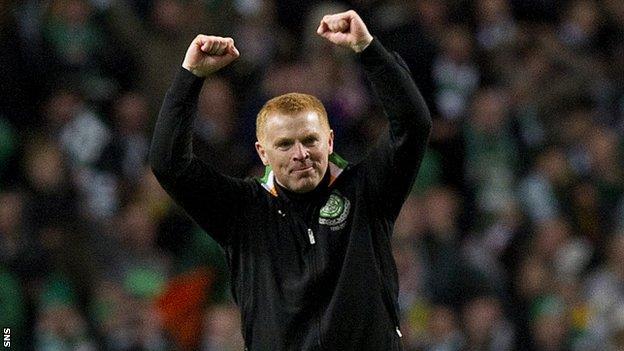 Elated manager Neil Lennon highlighted the chasm in resources between Celtic and Barcelona after his team stunned the Spaniards in the Champions League.

Victor Wanyama, 21, and substitute Tony Watt put Celtic two up in Glasgow before Lionel Messi made it 2-1.

"[Barca boss] Tito Vilanova can bring on David Villa and Cesc Fabregas and I bring on an 18-year-old kid who cost £50,000 from Airdrie," said Lennon.

"I think it is one of the greatest nights in the club's recent history."

And despite waves of attacks by the Catalans, they could find no way through an organised and determined Celtic defence, with home goalkeeper Fraser Forster in supreme form.

As a manager I don't know if I will top that. I hope I do, I am still young, still progressing

With seven minutes remaining, Xavi failed to control Forster's long kick and striker Watt pounced on the ball, raced towards the goal and hammered it low into the net to stun the visitors.

Messi's close-range strike in injury time could not ruin what Lennon described as a "very poignant" result following the club's 125th anniversary.

"The players are the heroes," he said after the match, which leaves Celtic two points behind leaders Barcelona in Champions League Group G and three points clear of third-placed Benfica.

"I can't speak highly enough of their performances tonight and they will go down in the history books of the club as the team that beat probably the best team in the world."

While wanting his players to "enjoy the moment and take it all in", Lennon said the win merely improved his team's chances of progressing to the last 16 in the tournament.

"It's given us a greater chance than we expected before the game. We still have two very difficult games," said Lennon, whose team next go to Lisbon to face Benfica.

He said: "It is a phenomenal thing he has done so early in his career.

"I said before the game I had no hesitation in playing him but we felt his lack of experience would have been a bit too much to put him in the starting line-up.

"But he came on and he did everything we asked him to do. He scored a brilliant goal and I felt he should have had a penalty when he got the other side of Javier Mascherano.

"The kid is learning and he has written himself into the history books of the club.

"He's 11 games into his career. I hope he has a fruitful career but it will take some topping what he has done tonight."

Describing Celtic Park as "one of the greatest arenas in European football", Lennon praised the fans for the atmosphere they generated and gave a glimpse of how he had spotted a flaw in their famous opponents' armour.

"We did feel they were vulnerable from corners, at the back post," he said.

"I felt Wanyama or [Mikael] Lustig could affect that. The delivery is so important. Charlie Mulgrew is one of the best dead-ball takers in British football."

And he continued: "This is up there with anything I've ever done in my life.

"Playing in the team that reached the Uefa Cup final was pretty special, the 10 years I had under Martin O'Neill were great times, and I had great times under Gordon [Strachan] reaching the [Champions League] last 16 here.

"But as a manager I don't know if I will top that. I hope I do, I am still young, still progressing.

"When we scored we knew the storm was coming and it came.

"They hit the post and the crossbar so they can feel very unlucky that they didn't get something out of the game."

269 comments
Back to top
unknown