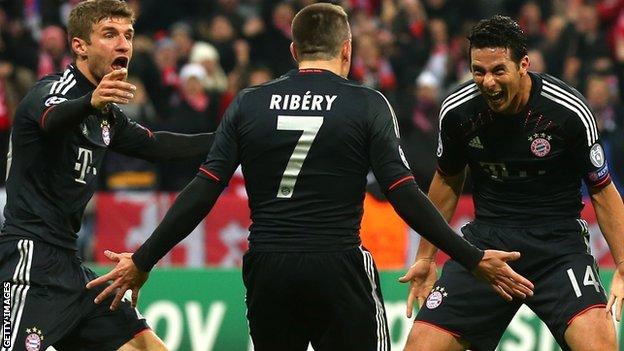 Wins for Galatasaray and Benfica revived their hopes of qualification to the last 16.

French side Lille and Nordsjaelland, of Denmark, are out of the competition following heavy defeats.

Italian champions Juventus had been hoping to end a European record run of nine successive draws, and they did so in style - hammering Nordsjaelland 4-0 in Turin.

Bayern Munich went a long way towards contributing to the statistic that saw the most goals in a single round of matches in the Champions League in four years.

Their 6-1 win over a lacklustre Lille moved Jupp Heynckes's side to the top of the table.

Valencia similarly overpowered BATE Borisov 4-2 with strikes from Jonas, Roberto Soldado and a Sofiane Feghouli brace. The Spaniards are now second in the table behind Bayern.

The group is now all to play for, thanks to Celtic's 2-1 win over Barcelona in Glasgow and a brace from Oscar Cardozo which sealed a 2-0 win for Benfica at home to Spartak Moscow.

All four teams can still make it through to the knockout stages, but Barcelona and Celtic remain in the top two spots.

Spartak, who have lost three of their four games in the competition so far, have an uphill struggle in their final two fixtures.

Burak Yılmaz scored a hat-trick as Galatasaray, who propped up the table before kick-off, defeated CFR Cluj 3-1 in Romania.

The hosts' Modou Sougou equalised Yılmaz's opener, but Galatasaray fought back to register their first victory and move into second in the group.

Manchester United's defeat of Braga means the English side top the group and progress into the last 16, but any of the other three teams can still join them.