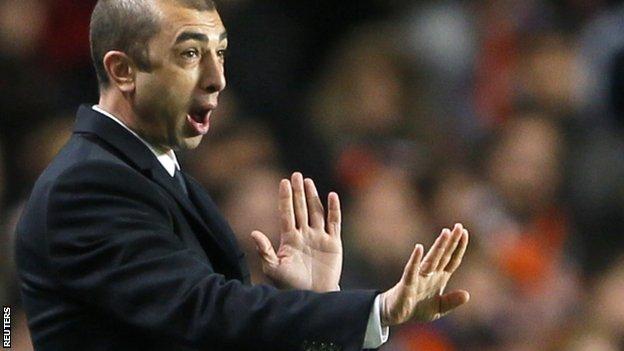 Chelsea manager Roberto Di Matteo admitted the Blues got lucky against Shakhtar Donetsk - but insisted they deserved to win.

Di Matteo said: "I think in terms of the timing of the goal you could agree there was an element of luck.

"But when you get a win against such a good team as this you deserve it."

Chelsea took the lead when Fernando Torres closed down a clearance from goalkeeper Andriy Pyatov and saw the ball bounce into the net, before Willian levelled.

Oscar put Chelsea back in front with a fabulous 40-yard shot over the retreating Pyatov's head, only for Willian to equalise again.

Moses came off the bench to head in a late winner and Chelsea will now make themselves strong favourites to reach the last 16 if they draw with Juventus in Turin - whereas they effectively would have had to win before Moses struck.

Di Matteo added: "We did a lot of good things and put them under pressure, especially in the first half, which produced our two goals for Fernando Torres and Oscar. We got those goals with high pressure on the goalkeeper.

"It was a game we needed to win and we achieved that under a lot of pressure. We need to get something out of our last games now."

Chelsea's final game is against Nordsjaelland at home while Shakhtar meet Juventus, meaning the Blues would be in prime position to go through if they avoid defeat in Italy later this month.

Captain John Terry was left out because he was short of match fitness after his four-match ban and Di Matteo said: "John is a fantastic player for this club. He has got many qualities and I'm very happy he is back available for us.

"Given that in the last four weeks of his professional life he has had one competitive game, I thought we needed players who were 100% match fit for a game like this. I am glad he is back with us because we will certainly need him."