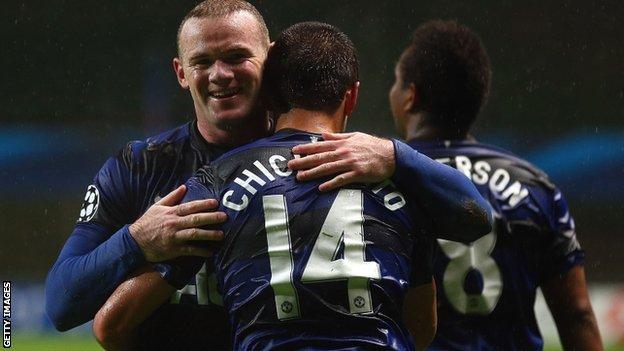 United beat Braga 3-1 to ensure they will finish top of Group H.

"We were disappointing last year and I think the supporters wanted a reaction to that," said Phelan.

"I think it was important we got into it quickly and we have done that - four games gone and we are more than happy."

Last season, United exited at the group stage of the Champions League for only the third time in 17 years - picking up just nine points to finish third in a group that contained Benfica of Portugal, Swiss club Basel and Romanians Otelul Galati.

Sir Alex Ferguson's side have been impressive this year and three successive victories meant they went into Wednesday's game needing just a point to progress.

Braga took the lead four minutes into the second half through Alan's penalty, before floodlight failure just before the hour mark resulted in a 12-minute delay.

Wayne Rooney converted a penalty five minutes later after he was brought down in the box and Javier Hernandez rounded off the scoring with a third in stoppage time.

"It is a little bit surprising that we have scored three goals here tonight," Phelan added.

"In the first half we were not really doing anything in the game other than keeping possession of the ball.

"Possibly, with the way the evening panned out, that changed things for us - with the tempo of our game going up."