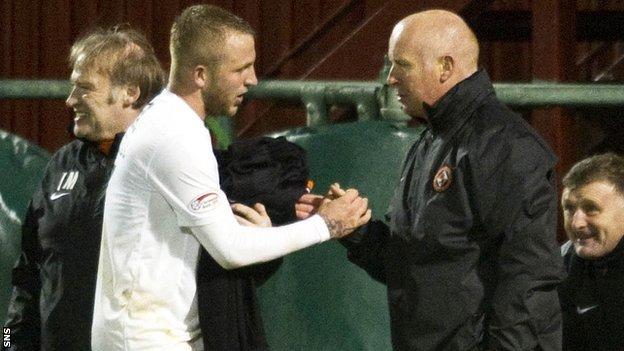 "It's one wee bit of quality that won us the game," said Houston.

After some bad performances, we've gone back to basics

"The biggest thing for me is winning the match. Three points make a big difference and we're the guys who've got the break and won the match."

With a goalless draw seemingly on the cards, Keith Watson picked out Russell with a deep cross and the 22-year-old, who netted United's winner at St Mirren last month, looped a header over Darren Randolph.

"It's not the first time he's scored a goal like that," said Houston. "He scored at McDiarmid Park last year with the exact same type of header.

"It's deceived the goalkeeper and gone over the top of his head. For me, that shows great quality. Great ball in from Keith Watson. Perfect delivery and a perfect header as well.

"It's the sixth clean sheet for us for a season where we've been second-bottom for quite a wee while. It's only three or four teams that have scored against us but they scored three or four goals.

Victory extends United's unbeaten league run to four, having struggled for goals and points in September and October.

"I won't get carried away," added the United manager. "When we were second bottom and people were asking questions, I always said 'judge us at the end of the season'. I never look at the league at this time of the year.

"After some bad performances, we've gone back to basics. We defended well as a team again and worked very, very hard and we've got our reward."