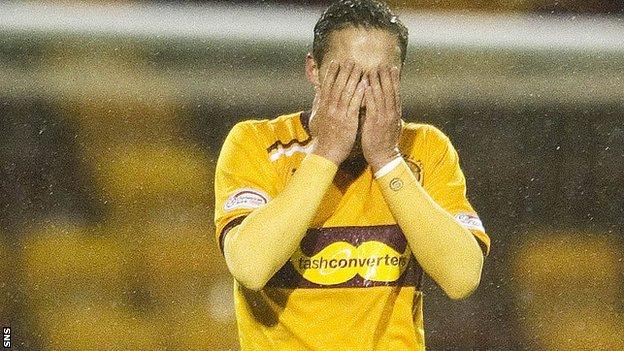 Motherwell manager Stuart McCall regarded only the result as negative after watching his side lose to Dundee United at Fir Park.

A late Johnny Russell header broke the deadlock and proved to be the winner.

"Disappointed with the result but certainly not the performance," McCall said. "I was pleased with the football we played. We hit the woodwork twice.

"I think we could play them 10 times a season and win five and lose five because we're just so equally matched."

Henrik Ojamaa rattled the crossbar with a first-half strike from the outside the box and the goal frame frustrated the Estonian again in the second when his low drive came back off the post.

"He's working hard for the team, he's playing well," McCall said of Ojamaa, who is yet to score this season.

"It's a great effort he has from 25 yards and in the second half he hits the post. He's just got to stick at it. He's certainly playing well enough for the team, he's giving everything he's got.

"It's disappointed we've not managed to score."