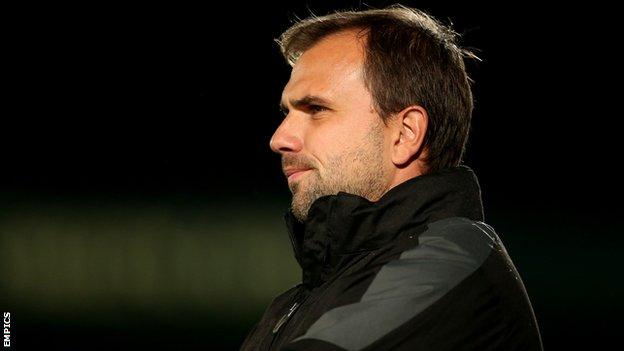 Plymouth Argyle manager Carl Fletcher says he does not feel under any more pressure despite seeing his side slump to a fourth successive defeat.

Argyle and are only four points above the bottom of the League Two table.

"The pressure's no different than it was last week or six months ago," Fletcher told BBC South West Sport.

"Every manager's under pressure to get results, so no different than before."

However, supporters booed Argyle at the final whistle and the crowd of 5,219 was their lowest since they the last home game before

"It's the crowd's prerogative, they pay the money and they come in," Fletcher said.

"But at the end of the day we're all healthy and we'll all go home and see our families and tomorrow's another day."

After a lifeless first half Fletcher's team played a lot better at the beginning of the second with Paris Cowan-Hall putting them ahead in the 48th minute.

"I'm a little bit miffed into how we actually lost the game," Fletcher added.

"In the second half we got our rewards, the tempo was a little bit higher - we had complete control of the game really and we went and lost it 2-1."