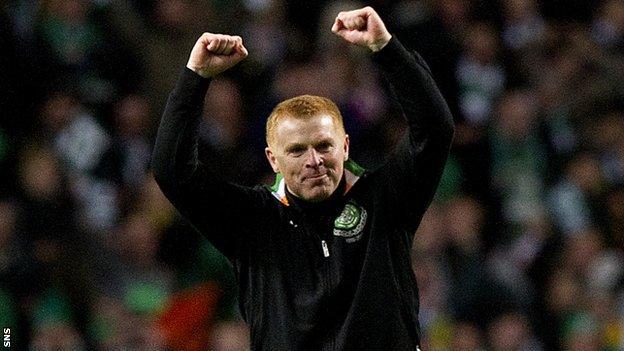 Tactics, he said, mean nothing. The players are all that matters.

But, with respect to the man whose side had just inflicted defeat upon Barcelona for the first time this season (outside the Spanish Super Cup), he was talking nonsense.

For Lennon has to take enormous credit for ensuring every player he sent out onto that pitch defied a technically superior opponent to record one of the outstanding results by a Scottish club in Europe.

Bear in mind that this Barcelona team has started the domestic season better than any previous Barca side.

They may be a shade less impressive than Pep Guardiola's Champions League-winning team, but they had already equalled Guardiola's best start to a European campaign and look good to reclaim their La Liga title from Real Madrid.

So, when the pre-match team news confirmed that the Celtic captain Scott Brown had succumbed to a virus and their predatory striker Gary Hooper was not fit enough even to make the bench, with James Forrest and Emilio Izaguirre already ruled out, the portents were not good for the masses streaming into Celtic Park.

But, just as he had in Camp Nou two weeks before, Lennon sent out a well-drilled 4-4-1-1 formation designed to limit Barcelona's chances, but also to try to mount a threat of their own.

The first of those aims was, on the whole, achieved, with Kris Commons typifying the all-hands-to-the-pump resolve as he constantly tracked back to help more naturally defensive-minded colleagues to harass and harry the ever-patient Barcelona stars.

Joe Ledley probably touched the ball fewer times than in any other match he has played and yet his shuttling around the pitch, denying players space, made his contribution priceless.

Barcelona appeared at times over-elaborate, but the truth was that their traditional give-and-go football just wasn't creating the spaces it usually does.

And, when it did, Fraser Forster was there to further enhance his growing reputation as a top-class goalkeeper.

At the other end of the field, Miku produced arguably his best performance since joining Celtic as he dropped off the front to pick up the ball and start rare forays forward.

But Celtic's best chance of a goal was always going to be from a set-piece and so it proved with the opener.

Lennon had pin-pointed this, but correctly stated that without the accuracy of Charlie Mulgrew in these situations, the chances would have been worthless.

Celtic have come a long way since their last Champions League match at home.

Unlike that night against Benfica, they now look confident in their ability to compete at this level.

That confidence, from the two matches against 'the best team in the world' as well as the hugely important win in Moscow, should now allow them to secure a place in the last 16.

They can go to Lisbon in two weeks with the belief they can come away with a point at least.

Celtic are a team growing in stature and, despite his modesty, Neil Lennon is a manager doing likewise.