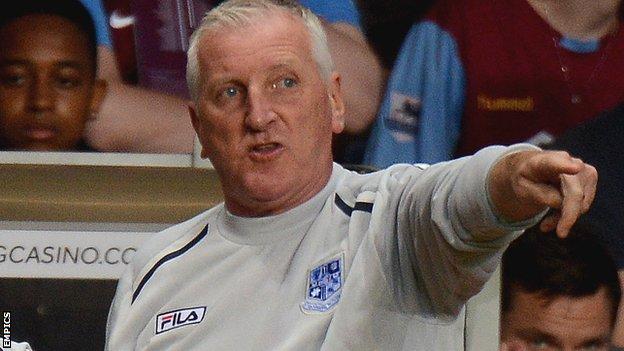 Ronnie Moore praised Tranmere's resolve after a 2-0 win at Hartlepool that saw Rovers return to the top of League One.

Tranmere had collected only one point from their three games before

"I said before the game that you look back on nights like this - a freezing cold, windy, rainy, horrible night in Hartlepool," Rovers boss Moore BBC Radio Merseyside.

"Had we got the spirit to grind out the result? That's what they've done."

The 59-year-old continued: "I think a lot of people probably thought this was a game we could slip up on.

"We knew that a draw would take us top but if you can get the win, you're two points clear again and that's fantastic for us."

Victory came at a cost for Tranmere, however.

Opening goalscorer Andy Robinson collected his fifth yellow card of the season, meaning he will be suspended for the trip to Oldham on Saturday, while winger Abdulai Bell-Baggie picked up a knee injury that will keep him out of action for two to three weeks.

"On our day, we're as good as anybody in the league," added Moore.

"There are teams with better budgets that we've got, but we've got spirit, fight, desire and players who can play. They all add up to making you a good side.

"There will be days when we get beaten because of our lack of depth. When you pick up injuries and yellow cards, it's hard. You've got to remember that we've only got 18 pros and three loanees."