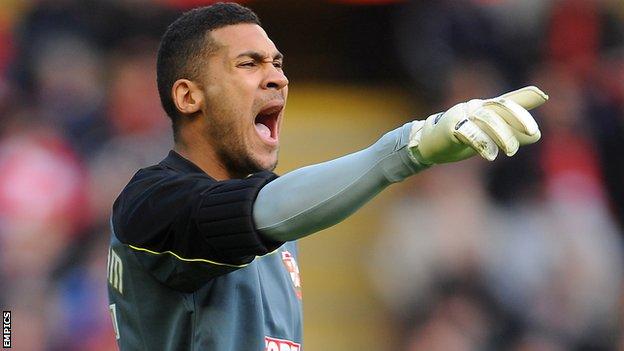 Swindon goalkeeper Wes Foderingham says he is happy to wait for his chance to become an England U21 international.

The 21-year-old, who has played for his country up to Under-19 level, was not included in Stuart Pearce's squad for next week's game with Northern Ireland.

But England goalkeeping coach Martin Thomas has said Foderingham is being "closely monitored" by scouts.

"I'm happy that they're looking at me and that I'm on their radar," the young keeper told BBC Wiltshire.

"I'm aware of the fact that they've been here a couple of times this season and last season to watch me. I'm pleased with that."

And Thomas, who has worked within the national set up for 15 years, said the current generation of young keepers is the best England has had for 10 years.

"I've read what he's said and he's spot on when he says there's a great crop of young goalkeepers because at the moment there's about four in front of me and I can't complain about that because they're doing really well in the Championship," continued Foderingham.

"We're all within two years of each other and that's really rare - to get five or six goalkeepers of a good quality - and it's only going to be good for the future of English goalkeeping.

"It's a shame for me that I haven't been in the side yet, I'm disappointed and I'll keep working hard to try to get in the team, but if it doesn't come I won't be too upset. I'm just trying to concentrate on my form here and trying to get us into the Championship."

Foderingham had never played in the Football League before joining Swindon on loan from Crystal Palace last season.

He quickly established himself as first choice in the Town squad and signed a permanent two-and-a-half-year deal in January.

Foderingham has made 16 appearances in League One this season, keeping eight clean sheets, and believes his chances of an England call would improve if he played at a higher level.

"They tend to pick players who are playing in a higher league, which is probably rightly so," he added.

"If I can get into the Championship then that would be great for me."