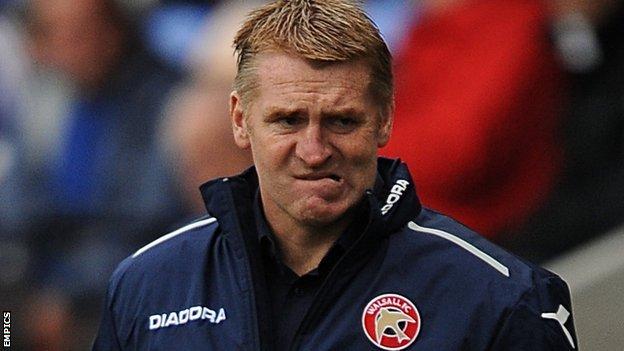 Despite good performances, Walsall are on a run of nine winless games which culminated in Tuesday's 4-1 home defeat by fellow strugglers Scunthorpe United.

"This result might force the issue to get somebody in," Smith told BBC WM.

"We're trying all the time. I've put in calls. But we'll have to see how long Flo Cuvelier and Andy Taylor are out."

Smith pointed out: "With Ben Purkiss pulling out on the day of the game, we had three missing.

"Flo Cuvelier is having treatment back at Stoke and will have an ultra sound scan on Thursday, while Andy Taylor might be five or six days and Ben Purkiss and Fabien Brandy have to be assessed too."

The players took the plaudits earlier in the season. They'll have to take the criticism

One decent loan signing could make a difference as the Saddlers prepare to take on Swindon this Saturday looking to end their run without a win.

But Smith is keen to stress that, despite the shock of his side's biggest defeat since taking charge in January 2011, there did not look much wrong when they were flirting with the League One play-off zone just six weeks ago.

"We're on a winless run and lacking a bit of confidence," he said. "But there are good players there.

"This was the same group who were clapped off when we lost five weeks ago.

"The players took the plaudits earlier in the season. They'll have to take the criticism.

"It was quiet in the stadium. They could hear comments throughout. But the fans have to be patient as they've seen what we're capable of.

"You get confidence through good performances and good results. And we thought scoring late on to get a draw in the FA Cup on Saturday at Lincoln would give us a lift.

"That just didn't happen. And it's not nice being 4-0 down at home with 10 men. But we'll get together and sort it out and come out fighting on Saturday."