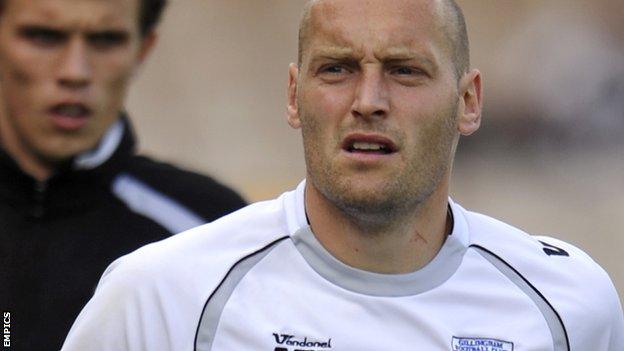 Gillingham captain Adam Barrett has heaped praise on 19-year-old centre-half Callum Davies who has partnered him in the club's good defensive run.

Barrett, 32, told BBC Kent: "He is a young lad who's come in and done well. He's got a bright future ahead of him.

"He's got all the attributes. He's stepped up to the first team this year and every time he's been called upon he's done very well.

"He's a good player. He listens, his attitude is good and he works hard."

He added: "I don't want to put too much pressure on the lad but he should have a good career."

Barrett was also keen to talk up the Gills strong defensive record so far this season.

He said: "The defensive record is fantastic at the moment, one of the best across the four divisions. We take pride in that and enjoy defending.

"We're a solid unit, not just the back four and the goalkeeper. It's as a team. We work hard as a team. We get back in numbers. We make it difficult.

"Everyone has played their part and that's what you need."

Barrett joined the Gills at the start of the season on a free transfer from Bournemouth and has helped steer the club to the top of the table, five points clear of Port Vale in second.

He added: "When you're top of the table, you're there to be shot at. Everyone will fancy taking our scalp but, as players, we take pride in being top of the league.

"It's very difficult to stay there but that is our aim. We've got a good strong squad. And I want us to be top all the way through and win this league.

"It's difficult; it's a different type of pressure. But it's good pressure."