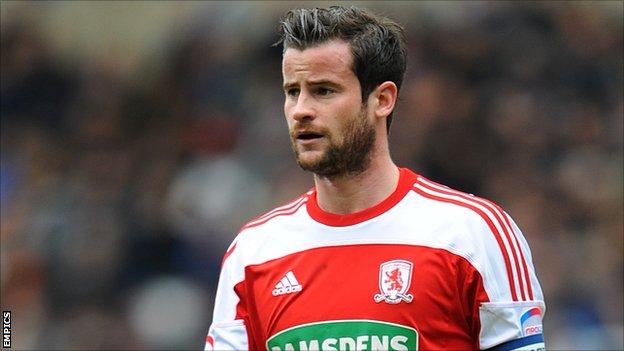 Middlesbrough have parted company with Matthew Bates, who rejected a new deal following his return to fitness after a cruciate ligament injury.

His contract expired with the Teessiders in June, but had been training with Boro on his return.

"It was almost a natural parting of the ways," boss Tony Mowbray told BBC Tees.

"We've allowed him to get himself fit. He got injured under contract and the right thing to do was to allow Matthew full rehabilitation, all the nutrition that goes with it.

Boro through and through

Matthew Bates began his career as a Middlesbrough scholar and progressed through the junior ranks at the age of 12 to become club captain.

Following his Boro debut in December 2004, he went on to make 126 first-team appearances, limited only by a series of career threatening injuries.

Mowbray himself had a similar upbringing on Teesside as a player and became a firm favourite before moving to Celtic.

"I left Middlesbrough when I was 27, 28, it's very difficult when you've grown up as a boy somewhere at the same place," the Boro boss said.

"Sometimes in life you have to face a new challenge, go and live in a different town, prove yourself to a new group of fans and a new manager. I wish him well."

"We've enjoyed having him around for the last few months. He's got himself back to the point where he was in full training for the last month, firstly with the young lads and now with the seniors.

"He's at the stage now where he probably needs to play a football match. We did have some discussions, I spoke to him, tried to gauge his thoughts, his plans and his ideas.

"We had talks on a contract, and we were both quite a way apart, and ultimately the decision was made that Matthew would move on. We wish him well"

The Stockton-born defender was a reported target for Premier League clubs last season, after establishing himself as a first-team regular and taken the captain's armband at the Riverside.

However the injury prompted Mowbray to focus on rebuilding his defence during the summer, with Jonathan Woodgate, Andre Bikey and George Friend brought in to strengthen the squad.

"If you put into context when he got injured he was captain of our football club and a main player, and yet things had moved on.

"My job was to make sure we had enough centre-halves and those players like Woodgate and Bikey, Seb Hines [an academy team-mate of Bates'] and Friend - we have a lot of cover.

"It's almost difficult in my mind for Matthew to come back into our club as number four and number five centre-half."