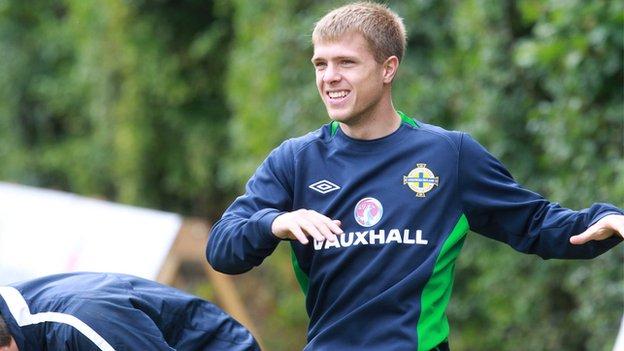 Northern Ireland striker Jamie Ward has been ruled out of next week's World Cup qualifier against Azerbaijan.

The Irish Football Association confirmed on Thursday afternoon that Ward would miss the Group F qualifier.

The Derby County player was included in the squad for the Windsor Park game but Pride Park boss Nigel Clough said Ward is sidelined with a hamstring injury.

"He won't be fit - I can understand they [NI] want him but firstly he has to be fit for us," said Clough.

"He's not looking like he'll be back this week, so it would be difficult for him to make next week's international."

A hamstring injury kept Ward out of last month's 1-1 draw with Portugal in Porto.

He was recalled for the Azerbaijan game despite not playing for Derby since the win over Nottingham Forest at the end of September.

Ward's last international appearance came in the 1-1 draw with Luxembourg at Windsor Park in September, when he came on as a second-half substitute.

The 26-year-old former Chesterferld and Sheffield United forward made his senior international debut against the Faroe Islands in August last year.

Northern Ireland sit fourth in Group F with only two points from their opening three qualifiers.