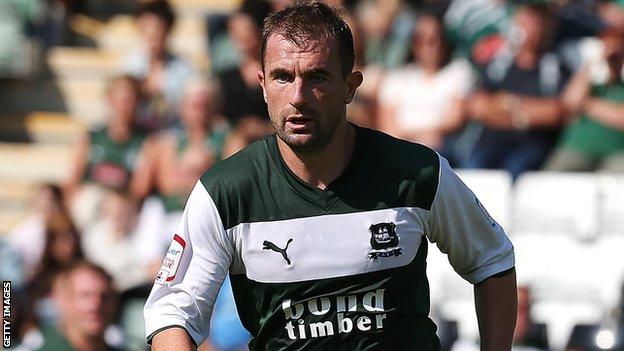 Plymouth Argyle midfielder Paul Wotton hopes to return from his knee injury by the middle of December.

The 35-year-old has been out since September and had surgery last month.

It means the former Argyle skipper, who has spent almost 14 years at Home Park, could be fit in time to face Devon rivals Exeter City.

"I'm progressing really well, it's just over three weeks since the operation and the nerve pain I had has disappeared," he told BBC Radio Devon.

Wotton has begun work on an exercise bike and in a swimming pool as he looks to get back to full fitness.

He is in his second spell at the club having after

Wotton previously spent 13 years at Argyle after coming through the youth ranks and making his debut in 1996.

"I feel really good," Wotton said of the injury.

"I don't think it was wear and tear, it's the sort of thing anyone could have.

"It needed sorting out, I played with it for three or four games and I struggled with it.

"It's sorted now and I'm busting to get back."