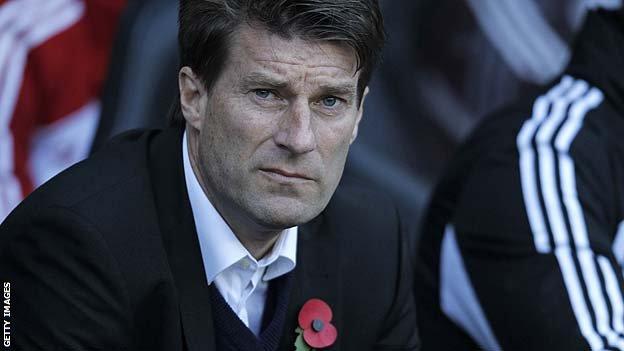 Michael Laudrup says Swansea City will face a fired up Southampton side on Saturday intent on saving manager Nigel Adkins from the sack.

Adkins accepts his position is becoming under increasing pressure as the Saints sit bottom of the Premier League.

And Swans manager Laudrup said: "These players want to win for him so he can stay because if another manager comes in they don't know what might happen.

"So we can expect a very, very motivated team from the first minute."

Adkins has steered Southampton from near the foot of League One to the top flight with two successive promotions.

But four points from his opening 10 Premier League games leaves the Saints rooted to the bottom, and Adkins concedes he is the favourite to be the first Premier League casualty this season.

Laudrup can relate to the pressure having been sacked after just seven months at Spartak Moscow and been bottom of La Liga with Getafe before turning results around.

"Southampton really need points," said Laudrup, buoyed by a narrow defeat at Manchester City, a cup win over Liverpool and a home draw with Chelsea.

"They will look at their next two games, against us and QPR, and say 'these are the game where we have to have something'.

"We know what we can expect. It's an away game and they will really put pressure on us.

"If we don't have exactly the same attitude as we had in the last three games then we will have huge problems.

"I really hope everybody understands that, first of all the players."

Since a majestic 5-0 away at QPR on the opening day of the season - Laudrup's first game in charge - Swansea have gone on to lose each of their three away games.

Nine points from six home games have taken them to a comfortable mid-table position but Laudrup feels lessons have been learned from their defeats on the road.

"From 19 away games, if we can win four or five games that would be fantastic, while still maintaining the home average of points," he said.

"Once in a while you need to win a game but you can also take a draw. What's important is that you try to win the game.

"It might be only a point but the most important thing for me is now I think we know whoever we play away we have to compact, we have to be solid like we were in the last two away games against Man City and Liverpool."