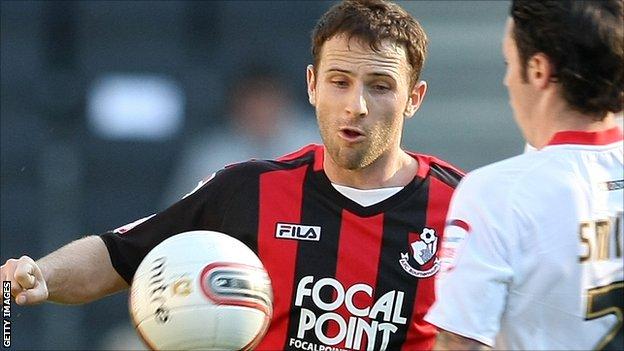 Bournemouth midfielder Marc Pugh has hinted he could yet stay at the club past this season, after manager Eddie Howe's return to the Goldsands Stadium.

Pugh, 25, is out of contract in the summer and has previously said he will not be signing a new deal as he wished to play in the Championship.

But the winger says the return of Howe has improved the chance of him staying.

"There is new life about the place since Eddie and Jason came back," Pugh told BBC Radio Solent.

Pugh, who was signed by Howe in June 2010, has become a key player at the Goldsands Stadium playing over 100 times.

Every player is ambitious, the club is on the up and we are performing brilliantly and who knows where the next couple of months may take us?

Back in the summer he said he would not sign a new contract at the League One club as he wanted to play at a higher level.

But Pugh hinted his stance may now be softening.

When asked, "is there more chance of Eddie Howe persuading you to sign a contract than there was in the past?", Pugh replied: "When we were performing really badly [under Lee Bradbury and then Paul Groves] it was a no brainer [to leave] because I do want to play at the highest level.

"But since Eddie and Jason have come in they've brought new life into the place.

"There is no change to the contract situation, it is still ongoing so I'm concentrating on my football and I'll leave the off-field business to my agent.

"Every player is ambitious, the club is on the up and we are performing brilliantly and who knows where the next couple of months may take us? I'm keeping my head down and doing my best for Bournemouth."

Pugh added: "I never hold grudges for managers not picking me but the old system didn't really suit me. But now we are playing 4-4-2 and the lads are full of confidence and that is what you need to be successful.

"They [Howe and Tindall] are such great characters and very professional about the way they go about things and they bring a lot of enjoyment to training.

"I love playing on the left wing and getting chalk on my boots and getting at full-backs and long may that continue. I'm really enjoying my football at the moment.

"We believe we are going to win every game we play which is a great mentality to have and it becomes a habit."