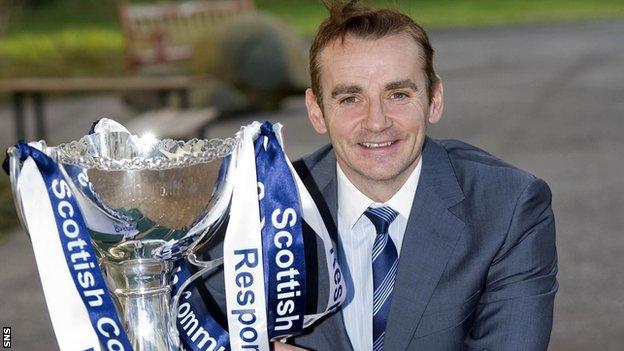 St Mirren's reward for knocking Aberdeen out of the Scottish Communities League Cup is a semi-final date with Celtic at Hampden.

The draw, made at Broughton High School in Edinburgh, also pairs Inverness Caledonian Thistle with Hearts. That tie will be contested at Easter Road.

The matches will be played on Saturday 26 and Sunday 27 January, with kick-off times still to be confirmed.

Neither St Mirren or Inverness CT have ever won the Scottish League Cup.

Celtic last lifted the trophy in March 2009 with a 2-0 win over Rangers, while Scottish Cup holders Hearts's last success in the tournament came 50 years ago, in season 1962/63.

Prior to the draw, the Scottish Football League's chief executive David Longmuir paid tribute to Celtic for their defeat of Barcelona on Wednesday night, calling it "a magnificent performance against one of the world's best club football teams" and a "source of pride" for Scottish football.

And St Mirren manager Danny Lennon is hoping his team can carry out a giant-killing act of their own when they play Celtic for a place in the final.

Describing Celtic's win as "a welcome shot in the arm for Scottish football", Lennon told BBC Scotland: "As Celtic showed against Barcelona, if you are willing to go and fight and you are well organised, the underdog can have their day.

"Once you get to this stage of the cup competition you've got to beat the best if you are going to go on and win it.

"We are looking forward to going to the National Stadium.

"Celtic and St Mirren, in terms of finances, are worlds apart. But football is not played with finances; it's played 11 guys against 11 guys.

"If we can match Celtic's endeavour and get a bit of luck on the day, then we will give ourselves an opportunity."

Inverness boss Terry Butcher is relishing the prospect of the semi against Hearts, who have been served with a winding-up notice by Her Majesty's Revenue and Customs.

"It's a great fixture to look forward to," said the former England centre-half.

"We have created history; it's the first League Cup semi-final for us as a club.

Acknowledging his club's perilous financial predicament, Tynecastle manager John McGlynn said he "had to be optimisitic" that Hearts would survive the demand of almost £450,000 from HMRC.

He told BBC Scotland: "I am hoping that Hearts will still be here when the semi-final comes round and we're playing Inverness at Easter Road."