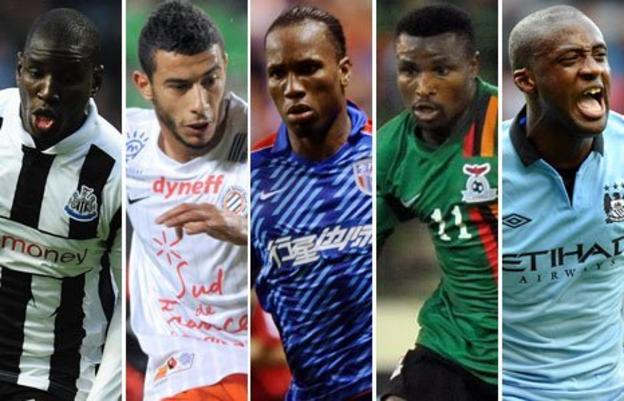 The winner of the African Footballer of the Year award will be announced in Sport Today at about 1650GMT.

It has been an outstanding year for all the nominees, with four of the players winning silverware.

Drogba could not have bid a better farewell to Chelsea at the end of the season after scoring the winning penalty to clinch the Champions League trophy for the first time in the club's history, and also scoring what proved to be the winning goal in the FA Cup final.

His Ivorian compatriot, Toure, was a key player for Manchester City as the Sky Blues were crowned Premier League champions for the first time - and their first top-flight title for 44 years.

A domestic title was also earned by Belhanda, whose 12 goals and all-round performances were a huge factor as Montpellier pulled off a major surprise to win the French Ligue 1 championship.

On the international scene there was yet another first as Katongo led from the front for Zambia, skippering them to a shock victory in the Africa Cup of Nations, where Chipolopolo beat Ivory Coast on penalties in the final.

Ba fared less well at the Nations Cup, with Senegal going out of the competition at the group stage, but he enjoyed personal success with Newcastle where he ended last season as the club's top scorer with 17 goals, helping them to finish fifth in the table.

There have been 11 different recipients of the BBC African Footballer of the Year. Only one man, Jay Jay Okocha, has won the award twice, claiming it in successive years (2003 & 2004).

Of those on this year's shortlist, only Drogba is a previous winner, though Toure did make the final five in 2011.

Katongo is seeking to become the first winner from southern Africa.

Players from Ghana have dominated the award, since it began in 2000, with the names of Sammy Kuffour, Michael Essien, Asamoah Gyan and Andre 'Dede' Ayew already on the roll of honour.

Previous winners of BBC African Footballer of the Year award: