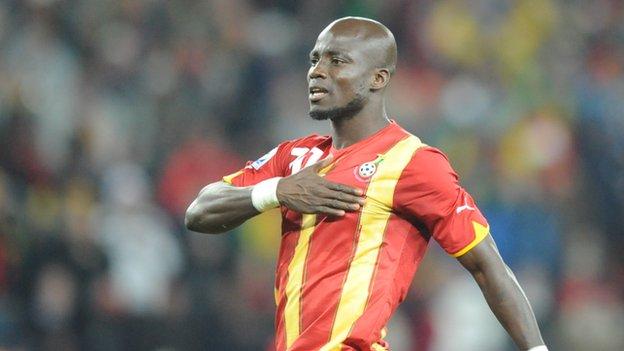 The 31-year old was presented at a press conference in the capital Tehran on Friday.

"The popularity and tradition of Persepolis, and its marvellous fans, were the main reasons for me to take my career to Asia," the former Juventus midfielder said.

Appiah had previously spent his entire career in Europe, after leaving Ghana's Hearts of Oak in 1998.

The man who will wear the number 3 shirt also insisted that he is in the best physical condition to contribute to the rest of the season for one of the giants of the Iranian game.

I always love to play and I play with full force

"I'm a footballer, I have a lot of energy, I can play and I want to be successful," said Appiah, who captained the Black Stars on their maiden World Cup appearance in 2006.

"I always love to play and I play with full force. I will do my best for this club."

Persepolis - whose matches with Tehran rivals Esteghlal have attracted crowds in excess of 100,000 - are trying to win the league title for the first time since 2008.

After leaving Hearts of Oak in the late 1990s, Appiah's stock rose with spells at Udinese, Parma and Juventus before a move to Turkish giants Fenerbahce between 2005-2008 effectively halted his career.

A dispute over a contract resulted in a lengthy period without any playing time before the midfielder returned to Italy with Bologna and Cesena before a brief spell with Serbian side Vojvodina.