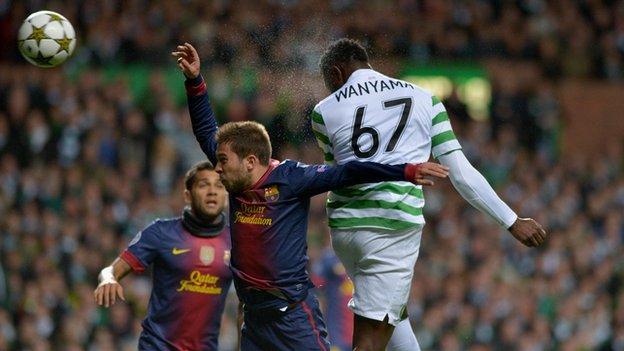 Celtic midfielder Victor Wanyama can become one of the best African footballers ever seen in Europe, says the coach who gave him his national debut.

The 21-year-old, who opened the scoring in Wednesday's famous 2-1 defeat of Barcelona, was just 15 when he played his first game for Kenya.

"I think he is going to be one of the top African players that has ever featured in European football," former Harambee Stars coach Jacob Mulee told BBC Sport.

Wanyama has been attracting widespread interest after impressing at Celtic following a £900,000 move from Belgian side Germinal Beerschot in July last year.

The youngster said he had rejected an approach from Aston Villa to move to Celtic Park and his performances for the Scottish champions have led to him being linked with other English Premier League clubs.

After impressing during his first season, the holding midfielder continued his steady rise on Wednesday when heading home a corner in the Scots' stunning Champions League victory over the four-time champions.

The central midfielder gave a powerful display throughout the match as his side successfully held off the challenge of Xavi, Andres Iniesta and Lionel Messi as Celtic dramatically improved their chances of qualifying from Group G.

Rated at £25m by Celtic manager Neil Lennon, Wanyama's display is likely to have further piqued the interest of any potential suitors - with the Kenyan alerting many when rejecting a contract extension last month.

"Victor has always been a very good ball handler - he's technically gifted and his superior skills mean he can do anything with the ball," said Mulee, who has coached Kenya on four separate occasions.

"He has guts too. In his first game, when I played him as a striker, he gave Nigerian defender Danny Shittu a hell of a time.

"I'm not surprised at the chat about him joining a Premier League side as any coach would want him in their first XI. When I read that Manchester United are looking for his signature, I am not surprised."

Both United and rivals Manchester City are believed to have been monitoring Wanyama, who also impressed in Celtic's 2-1 defeat at the Camp Nou in October, in recent months.

And Mulee believes that the younger brother of former Inter Milan midfielder MacDonald Mariga, who now plays for Parma, has the right mentality to make the most of his on-field talents.

"Victor is very level-headed and is one of the most disciplined players I've ever handled. He's a player about whom there has never even been an iota of a bad story - he does not make the headlines for the wrong reasons."

Wanyama, whose current contract with Celtic is due to expire in 2015, told BBC Sport that "he is happy" at the club.