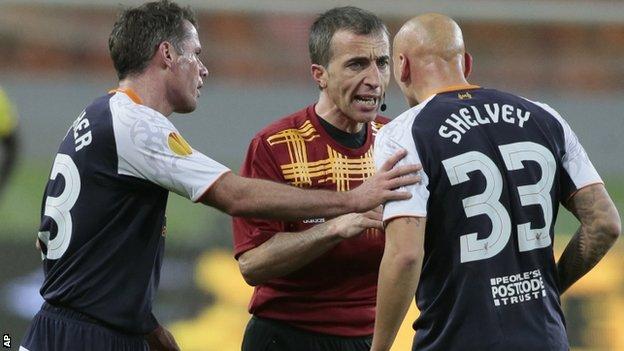 Liverpool boss Brendan Rodgers has defended his decision to leave several senior players in England after his side lost 1-0 to Anzhi Makhachkala.

Skipper Steven Gerrard and Luis Suarez did not travel to Moscow, where Lacina Traore's strike gave Anzhi victory to put them top of Europa League Group A.

Asked whether bringing Gerrard and the others would have made a difference, Rodgers said: "Not at all.

"I think that is a little disrespectful to the players who are here."

"They have been magnificent and I thought they did really well and we just got punished for a mistake," said the Reds boss.

"That led to us losing the game but I don't think it was anything to do with Suarez, Gerrard, Joe Allen, Martin Skrtel or Daniel Agger not being here.

"It was a much-changed team but Coady came in and was outstanding in his first start, playing against top players, and for Flanagan it was his first game in a long time.

"It was just one of those things. We will take it as a team, we are disappointed but there are so many positives [to take] from the game."

Anzhi manager Guus Hiddink admitted Liverpool had controlled the game but that his side should have taken their chances to kill the match off.

"They had a young side but that does not mean they were not experienced as some of those players play frequently in the Premier League," Hiddink said.

"They were good players, skilful players who were tactically good. They tested us but we also have some young players so it's a good result for us.

"We didn't finish it off in the second half, we had two big opportunities, but it was an interesting game on a very bad pitch.

"They controlled the game and tested us but that makes me happy with this result."

With two matches remaining in the group stage - at home to Swiss side Young Boys and away to Italians Udinese - Liverpool, who are joint second in Group A, still have much to do to ensure qualification for the last 32.