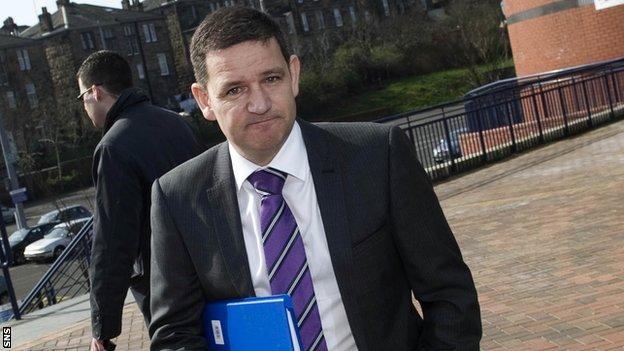 St Johnstone chairman Steve Brown would like to see a salary cap introduced because he thinks it would prevent more Scottish football clubs going bust.

"If you go down a league you lose in the region of £1m," said the Scottish Premier League board member after a year as chairman of the Perth club.

"So everybody pays over the odds on wages, then makes a loss to keep in the league, to make less of a loss than you would if you got relegated.

"It's a ridiculous model."

Brown took over as chairman at McDiarmid Park after his father, Geoff, ended his 25 years of service to the club in the same capacity.

Brown senior installed Steve Lomas as manager at the same time as naming his son as his own replacement.

And a year into the post Brown argues that limiting the payments that can be made to players would help those trying to operate Scotland's football clubs.

"The club is a business and it has got to stand on its own two feet," he said.

"[Wage capping] has to come. How many clubs are we going to see go to the wall before we say enough is enough?

While admitting to getting caught up in the thrills and spills of football, citing a top-six SPL finish and playing in Europe as highlights, the new chairman paints a stark picture when describing the difficulties he faces.

"There is not a lot of money in Scottish football," he told BBC Scotland.

"Trying to balance the books is the biggest challenge and I can see that for the foreseeable future.

"There is not enough money in the game to pay players' wages. In England they have a billion-pound Sky contract; we don't.

"We're charging supporters too much money to come to the ground.

"Commercially it is very limited what you can bring in.

"The only thing you can look at is expenditure and the biggest expenditure is players' wages."

Brown points to the effect of the recession on Saints' ability to generate revenue from non-footballing activities. In his opinion, it is becoming harder to stay still, never mind avoid going into debt.

He said there is always "going to be animosity and frustration" between chairman and manager as each fights his corner.

"Steve wants to get a good team on the park and I have to look after the finances," he continued.

"We keep talking. He is disappointed. We've got far too many players for the resources we have at present."

With Hearts in danger of following Rangers' financial disaster, Brown believes it is "very probable" that more Scottish teams will go to the wall.

"When you have leagues against leagues and clubs against clubs and supporters against supporters, the only thing that is going to fail is the whole of Scottish football," he argued.

"You see it at international level and the European ties - we are one of many clubs that failed at the first hurdle - but it is going to have an effect on the whole game.

"We are struggling to get people to come and watch St Johnstone.

"Last week if we had won the game we'd have gone top of the league and yet less than 3,000 turned up. It's really frustrating."