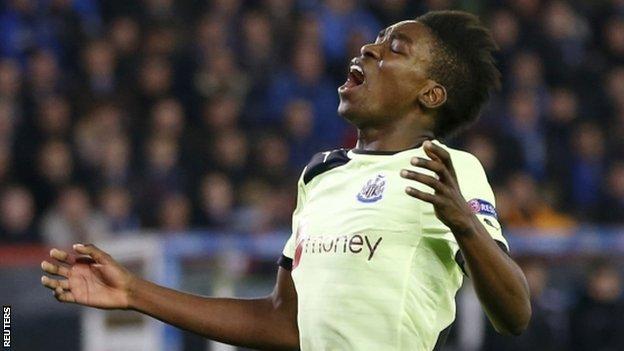 The brothers started together for the first time as 20-year-old Sammy set up Shola for the equaliser in Belgium.

Pardew said: "I thought they were both good tonight. We had Ameobi to Ameobi - which is almost like a song - for the second goal, which was nice.

Newcastle were 2-0 down inside 20 minutes thanks to goals from Ivan Trickovski and Jesper Jorgensen, but rallied to draw level before the break.

Vurnon Anita pulled one back with an excellent volley from 20 yards before Sammy Ameobi cleverly played in Shola to equalise with a low shot at the near post.

Sammy was impressive throughout as he and Shola became the first brothers to start a game for the Magpies in 60 years.

Pardew added: "It was a great little turn from Sammy.

"He has just got this way of getting out of corners that I have not seen many players being able to get out of. He wriggles out of situations.

"He still needs to tighten up a little bit on the tactical and intelligence sides of the game. He takes people on where perhaps he should pass.

"But he will learn that. He marks at set-plays, which he needs to do. He's 6ft 5ins.

Substitute Yohan Cabaye hit the bar with a free-kick late on as both sides pushed on for a winner but the point leaves Pardew's side at the top of Group D and with qualification in their own hands.

Pardew said: "We hit the bar and had a couple of good situations, but overall, I am delighted. 2-0 down at Bruges, it's tough.

"They have got pace in their team, so they are always going to be a threat.

"We are going to have to kick ourselves if we don't beat Maritimo at home next, with all due respect to them.

"We have got ourselves in a great position and are looking to just wrap the league up perhaps with that win there, which is our next game."